February 04, 2008
We got to the chili competition at about 3pm. It looked a lot slower than I expected it to be (there were 13 entries, as opposed to the 30 that there could have been), which was a good thing in my mind since I'd eaten more than I should have of the kolaches we'd gotten.

As soon as we got to the judges table, I was given my badge and I sat on the bench to get a better idea of what was going on. I watched people interact for a bit, then talked to the guy who was holding the competition. Turns out he (at least in the past; I don't know if he still does) judges other cooking competitions (on a regional/state/etc level).

After some time waiting, all the entries were turned in and the people who weren't judges were sent away so they couldn't try to influence the competition (which happened anyway, but whatever). I ate many good chilis, and a couple bad ones. There was a white chili I thought I would not like, but it turned out to be one of my favourites.

And if someone can tell me where the wire to plug my camera into the computer is (or loan me a card reader), I will even post pictures. 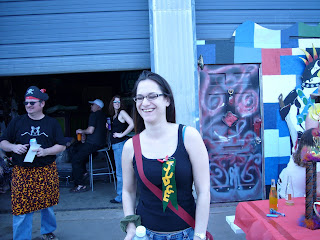