June 02, 2008
I actually have a bit more homework than I anticipated, so today I just want to tell you guys about gems. It appears that no one really knows what gems are anymore, but back in the 1800s they were a popular, if heavy, treat. So much so, that many pioneers even found room in their wagons to bring a gem pan. By the early 1900s, gems had fallen out of favour and most people just went with muffins. It's a sad, sad thing, really.

Traditionally, gem pans were made from cast iron. You can still find beautiful, old cast iron pans on eBay. In fact, aside from scouring antique shops hopefully (and often fruitlessly), eBay is the only place I know that routinely "carries" them. You can find a proper gem pan for as little as US$5, and I've seen them as much as US$300. You just never really know.

My advice, however, is to find one that's shallow, made in the mid-1800s (this is when the pans were really in their prime, quality-wise), and in extremely poor condition. I say to find one in poor condition because it'll be cheaper. The beautiful thing about cast iron is that no matter how poorly it's been treated, one can almost always resurrect it and make it beautiful again.

Here is my pan:

As you can see, it's made of cast iron. I found this beauty on eBay a few years back. If you look at the picture closely (does anyone other than me actually care enough to do so?), the batter wells are very shallow (~.75"). My pan was a wreck when I got it. Rusted completely, pocketed, unloved.

When I got it, I washed it in warm soapy water (this is the only time this pan has ever been washed by me; I cannot speak for any of its former owners), then immediately dried it with a soft towel (I don't know why it was important to me to use a soft, fluffy towel, but it was). Then I slathered it in shortening; top, bottom and in the cracks; then laid it upside-down on a sheet pan. It went in the oven set at 250F for several hours. Periodically I'd take it out of the oven, wipe out oil residue (and rust - this sort of a shortening bath is the most efficient means of repairing a pan like this I'm aware of) and put a little more on. Rinse and repeat. I did this over and over until I had ever speck of rust off. And then I did it one more time, to season it. The only remnant of its former life to remain is one hair that is burned into one of the cups. It's been there as long as I've had this pan, and it appears to be fused into the metal now.

Onward. Gem pans came in a variety of shapes (such as chickens, clubs, spades, hearts, etc), but I personally am not really a fan of those pans (I used to have one, but I think it would work better as either a decorative piece or for a product that's less dense than gems, so I gave it to my second mom. I believe she uses it as a decorative piece) because the cups are too small to give the gems the right texture. This is a rustic food; I'm not making cupcakes in the pan. So to me, the best pans are the ones like mine (d'uh) or ones like this. Shallow and wide - this allows for the right crust to form, as well as allowing the batter to get the right texture while it cooks.

When you make the gems (if you make the gems), you'll want to open them with a fork, just like you would an English muffin or a crumpet. Using a knife crushes the little holes. To me, those holes are a perfect carrier for pure maple syrup. I also occasionally like jam in them (this is really how P likes them - with jam), and I also love to fry up a little ham, fill the holes with syrup, put ham in the middle and make a little breakfast sandwich. They're great for munching on in the car, too.

I do not have a home recipe to give you for gems, however, I have a couple of other people's recipes I will share (please do not sue me).

The Old West Baking Book, by Lon Walters (which, btw, is an awesome book for many reasons, this being just one of them) has a lovely recipe for corn gems on page 30 (additionally, he gives recipes for a lot of other foods commonly eaten by pioneers. This book is wonderful, not only for its historical significance but also as a working cookbook). He also lists recipes for buttermilk gems and graham gems. I actually don't use this recipe, but I adore its authenticity, so here it is:

Mix cornmeal, salt, and sugar in a large bowl. Add boiling water and stir briskly. When cooled slightly, (so eggs won't cook), add both eggs and milk, and mix. Now stir in flour and baking powder. Mix should appear to be a very thick batter. If not thick enough, add more flour until it reaches the consistency of thin mashed potatoes. Do not overwork. Spoon into well-greased gem or muffin (Lon says to stack together 2 muffin pans to make it heavier, but I want you to buy a pan and help me revive this tradition) to two-thirds full. Bake immediately. When golden brown, remove from oven and turn out on cooling rack.

I make them a little differently. I make them based on this recipe. Instructions follow (I don't actually remember if the other recipe lists the baking instructions, or if it's just in my head because I love to make them):

Cut 1 tablespoon of butter into as many pieces as there are wells in your gem pan. Put one bit of butter in each well, then place the pan in the center rack of your oven. Heat the oven to 425F.
In a bowl, mix together the cornmeal, flour, salt, baking powder and sugar. Whisk in egg, then milk. Lastly, whisk in butter. Mix it together as soon as your oven dings that it's preheated. I don't really like to leave the batter sitting for too long, although there's certainly nothing wrong with doing so. Cut up yet another tablespoon of butter and put the bits in the wells again. Dip your spoon into ice water (tip from Lon, thanks!), get a big spoonful of batter then put it in each well. If there are wells remaining once you've used up all the batter, fill them up with water (for the health of your pan). Bake for 25 minutes or until golden. The gems should pop right out of the pan by lifting them w/ a fork.

And last, cleaning. I clean my gem pan by knocking off any little bits of batter I spilled outside a well while pouring it in the wells, then I simply rub it (inside each well, in the little nooks and crannies, and on the bottom) with paper towels. That's it. I am utterly unwilling to clean it any other way. You do what you like with your cast iron, though.

And now that I've rambled, here's the finished product. Enjoy! 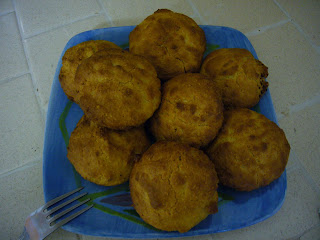