June 08, 2008
Ok, I bit off a lot this semester. Not more than I think I can handle, but definitely more than I'd be able to deal with if P wasn't here for me to nag constantly with questions. Why? Why? Why? He keeps reminding me that the whys will be answered in a couple years (ok, in reality, he keeps reminding me some of my questions might not ever get answered, but that most of them, at this point at least, will be eventually). I am impatient. I want to know everything about math. Now.

All this has resulted in fourteen hour days, when I'm lucky. And I'm still working on the weekends (where, sadly, I screwed my knee up and it is now full of Kool-Aid, or some other fluid. You'd think I'd've learned to use care when walking after having just recovered from a sprained ankle, but I evidently have not learned this very important lesson). So today I did not get to play Final Fantasy XI, as planned.

I did get to do some homework, though. And an exam review. So we were hungry, and I'm embarrassed to admit how much fast food we've been eating this week. I decided what I really wanted (wanted? No. Needed. Badly.) was a nice, simple pasta that just got to be what it was. No pretense, and no effort on my part. I am, after all, STILL working on homework (ok... technically I'm blogging. But you know what I mean. We all need breaks sometimes). Originally I'd intended to just use onion, parmesan, olive oil and pasta, but P really wanted a little bacon in there. I discovered some cooking prosciutto in the freezer and used that instead. If I'd had nuts, I might've added them too. Walnuts or pine nuts or... I think I'd really have liked some chopped brasil nuts in here too.

Here it is. I hope you enjoy it.

Heat a large skillet, then add the olive oil and prosciutto. Render it down, then add the onion, lemon juice and white pepper and cook on low heat. Start boiling the salted water. When the water boils, add the garlic to the skillet and the pasta to the water. Cook the pasta according to package directions or personal preference (I don't cook anything, really, according to package directions but I'm guessing I'm one of the few people who ignores everything I'm told to do) and shimmy the garlic, prosciutto and onions around until they're carmelised. I didn't add any salt because the pork is already salty. Surprisingly, I didn't salt it in my bowl, either. When the pasta is done, drain it and add it to the skillet. Stir it around and get the pasta covered by the nice onion and lemon juices, then add in the parmesan and the extra virgin olive oil. Toss lightly to combine everything well, then serve. Serves 2.

*Cooking prosciutto is an awesome thing. It's the exact same thing as the prosciutto you might normally buy, except it is the ends of the meat. I'm not really sure what they normally do with it, or if the deli guy takes it home, but I like to buy it and use it in place of bacon in recipes, when I remember I have it. I usually buy 1-2 pounds at a time, break it up into third-pound bits (the deli counter will also slice it thinly for you, or thick, or whatever you want) and freeze it until I want it later. They will often charge you less than they do for "regular" prosciutto, which makes it an extra value since people appear to not buy it (they're always surprised when I ask for the ends). If you don't feel like going to all the trouble of getting it, just use a slice or 3 of bacon instead. Chop it up and proceed. 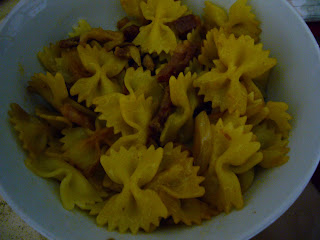