January 27, 2010
Sometimes, the yummiest treats come about completely by happenstance. Today was one of those days for me. I like to make muffins for my dog, Francis. He's a big fan. I make a tray, let them cool, then freeze them and dole out one every day or two. Since he's so into pumpkin (oddly, even more than blueberries) and since I have so much fresh pumpkin I'm working through he's mostly been eating pumpkin muffins these days. I have several recipes for pumpkin muffins, but I never really can decide which one I like best, so I rotate them. This time I was using this recipe for pumpkin ginger muffins.

Today, it just so happened I was in kind of a hurry, since I was making other treats, canning pumpkin butter and beef barley soup, and have a lot of homework to deal with. So I started making modifications based on the "he's a dog, so this won't bother him" premise. I tasted the batter before I put it in the muffin tins and it was amazing. I tried to get P to taste it too, but he's weird and won't eat batter. Anyway, my point is that these originally were just dog treats, but now they're dog and people treats. I'm not entirely sure I can ever go back to the spiced pumpkin muffins. Hope you enjoy!

Note: I slightly overcooked mine, so they're a little browner than they should be. You'll do better, I'm sure.

Preheat oven to 350°F. In a medium sized bowl, sift together the flour, salt, sugar, and baking soda. In your stand mixer (or by hand; I did it in the mixer), combine the pumpkin, eggs and water. Add in the dry ingredients and mix until just combined. Stir in the melted butter. Fill prepared muffin tin 2/3 full. Bake for 25 minutes (the original recipe says 25-30, but 30 was too long). Test with a toothpick, then cool on a rack. Makes 12. 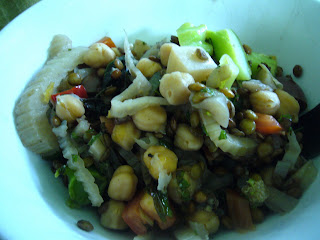