Showing posts from April, 2010
Show all

April 30, 2010
And, another week with too much food waste goes by. I had the best of intentions, but it didn't work out. I am so embarrassed by all of this waste. I lost: 14 ounce can tomatoes with chiles (this got opened by mistake and I never actually got around to making something with it like I meant to) 1 10-ounce bag spinach (I don't want to talk about this; it's completely embarrassing how it happened) 6 fingerling potatoes (I actually forgot these existed, and then I realised there were potato plants growing in my kitchen. If I had the space for a proper garden I would have planted them; unfortunately I don't) 1 red bell pepper (I just forgot this is in the fridge. I was poking through the fridge and discovered it and was going to eat it when I noted that it was.. well, very, very rotted). a small but undetermined amount of smoked salmon (How did this get in my house? And why weren't there any bagels in the house to go with it? This would NEVER have been wasted had I kno
4 comments
Read more 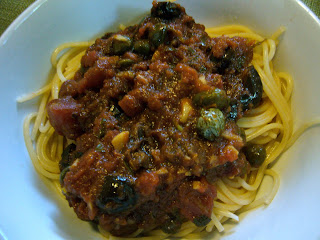 I wrote this post 10 days ago, but I was so busy I forgot to take a picture (which is sad, because it was quite delicious-looking; I wouldn't mind staring at this food for long stretches of the time I'm supposed to be learning things). This will be made again soon so here's the post, and I'll add the picture the very next time I make it. The end of this semester is really just doing me in. So, as you might expect, we are living on take-out and meals that are very fast to prepare (plus lots of sandwiches). Pasta puttanesca is one of my favourite meals, being full of briny things and yumminess. I really do love brined things. Plus, you really never can go wrong anywhere anchovies are present. Hope you enjoy! 1 pound pasta, prepared according to package directions (I like spaghetti or linguini, but you should use what you like) 1 14-ounce can diced tomatoes 1 14-ounce can crushed tomatoes 1 tin anchovies (rinse them) 1/3 cup capers (rinsed or not; I like foods salt
4 comments
Read more

Sad to be Neglecting You

April 26, 2010
Hi guys. I just wanted to let you know that I'm sad to be neglecting you so much. After the 5th, I'll be done with all of the semester save one final on the 13th. I have loads of things I want to cook and share with you (because, y'know. When I'm supposed to be thinking of nothing but differentials, all I can think about is the stuff I don't have time to cook right now), so please keep being patient with me and know I won't be silent forever. I'm just trying to get through one of the roughest semesters I've ever had and while I can see the end of the road coming full speed ahead, I have so much studying to get through over the next week or so that it's actually moving a little too quickly. If I manage to get in a couple quick meals before this semester is over, I'll make sure to post them! You guys are the best!
Post a Comment
Read more

April 23, 2010
Yet again, not a perfect week. I still feel like I'm doing well, but not as well as I could be doing. Still plenty of room for improvement. This week, I lost: 2 small onions (who got moldy. Huh) 1 small chunk of feta that I forgot was still in the fridge, about 1 ounce, maybe 2
2 comments
Read more

April 16, 2010
This was a huge waste week for me. Not really sure how I can waste so little for a while, then all of the sudden it's like a storm of waste. This week I lost: 2 small cucumbers (the little Armenian ones) 1/2 cup olive salad (seriously? This goes bad?) 2 servings fried rice
Post a Comment
Read more 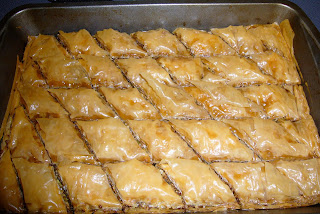 So I have a confession to make. Phyllo dough intimidates me. Thin, fussy, drying out quickly and tearing easily, it always just seems like a lot of work to deal with. For ages I've been intending to make baklava (one of my all time favourite desserts) instead of buying it like I usually do, but I've stalled and stalled simply to avoid dealing with the phyllo. On Wednesday, I ended up promising to bring a tray of baklava to school with me. I could've chosen any other dessert, but I figured if someone was expecting me to bring it, I'd have no choice but to stop stalling. I created this recipe by combining my most beloved traits of all the different kinds of baklava I enjoy eating, so this is a fairly "generic" baklava that doesn't exemplify the traits of any one specific region's way of making it. So, here we are. Hope you enjoy! 1 pound phyllo (filo) dough 1 cup butter, melted and made into clarified butter* 1 cup pistachios, plus another 1/4 cup fo
2 comments
Read more

April 09, 2010
Fried rice is one of my favourite ways to use up leftover rice. So much so, that sometimes I make rice just so I can have leftover rice to fry in the next day or two. This was one of those times. I figure most everyone has a way they make fried rice, but I thought I'd share mine. It's a quick meal to have, whether you're tired after work or just trying to fit in all the studying you need to do for your next two tests which are next week. Usually I also like to put some corn it, but it turns out that I'd run out of corn and forgotten to buy more. So it's okay without corn too. Hope you enjoy! 1 small onion, sliced into half moons 1 bell pepper, cut into one inch chunks 1 cup thickly sliced celery 1 cup shredded (or close to) green cabbage 2 eggs 2 cups peeled and deveined shrimp 2-3 cups leftover rice (any kind) 1 tablespoon each: tomato paste, olive oil (infused with garlic or not), sesame oil, hoisin sauce 1-2 teaspoons Sriracha or other spicy sauce 2 te
Post a Comment
Read more

April 09, 2010
Eek. So close to another no waste week. And then I discovered something that probably should've gone out ages ago, but which I hadn't noticed hiding in the fridge. This week, I lost: 2 ounces brie And, in the interest of full disclosure, the following tale (this isn't food, but it sort of is food): The day before Easter, I went to the butcher to pick up Francis' weekly allotment (biweekly?) of femur bones. I buy 1-2 cow femurs and have them cut into 3" pieces, of which he gets one a day for his bedtime snack. A previous time I'd been there, they told me they also sell scrap meat at the same price as the dog bones (30 cents per pound, by the way, and an excellent source of cheap marrow bones if you're so inclined {which I'm not}). This time, I decided to get a couple pounds of this scrap meat to mix into some of his food as a snack. They were insanely busy (I'd forgotten all about Easter, so I didn't know why until later that night), but the
Post a Comment
Read more 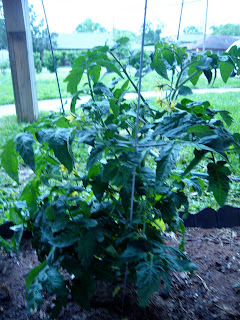 This isn't a "real" post, in that there aren't any recipes in it. Though later this week or early next, look forward to a baklava post. Anyway, I recently put in a tiny tomato plant. It grew quickly, has several tomatoes growing on it already, and about a billion new blooms. So even though it's not cooking, it is about food. Today, I wrestled on a tomato cage so it'd stop growing into my front yard and took some pictures for you all. I'm looking forward to a long season of freshly picked tomatoes. Whee! If I ever get some time, I'd like to put in an eggplant as well. The Plant: Growing Tomatoes:
2 comments
Read more 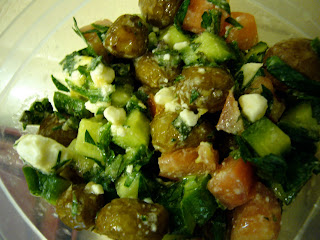 I got some teeny tiny potatoes recently. They were each about the size of my thumbnail. Too cute for words, really. I thought for a while about what I wanted to do with them, and ultimately I decided on a salad. It's warming up here in Houston, so my thoughts are slowly meandering over to lighter foods. Potatoes don't really qualify as "light" in most cases, but I thought if I freshened it up with some lemon, herbs and summery veggies, it'd be light but still substantial. Hope you enjoy! 1/2 pound baby potatoes (about the size of a thumbnail) 1-2 tablespoons olive oil salt and pepper to taste 1/2 cup diced cucumbers 1 small tomato, diced zest of 1/2 lemon juice of 1/2 lemon 1/8 cup chopped parsley 1/8 cup chopped basil salt and pepper to taste 1/4 cup crumbled feta cheese (optional) Heat oven to 400F. Season the potatoes with salt, pepper and olive oil, then roast until soft, 20-30 minutes. Cool slightly, then combine with remaining ingredients (incl
Post a Comment
Read more

April 02, 2010
Not a bad week, over all. Particularly given that I haven't cooked a single thing all week, due to how busy with school I've been. I lost: 4 slices sourdough bread.
Post a Comment
Read more
More posts