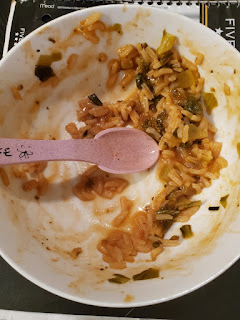 This picture was the best I could do, because we were all done eating in about 5 minutes and I didn't think about a picture until I realized I would need to replicate this at a later date. I had a lot of cabbage in my house. I mean really a lot. Brussels sprouts, green cabbage, kale, broccoli, and bok choy. I really needed to start using it up, because definitely not throwing it away. I decided I would fry up all of the cabbages except the green (that's slotted for kraut), but when I picked the Pig up from school, she told me that she had a loose incisor that was bothering her enough that she didn't even want to eat meat (that kid loves meat more than life). I told her that I'd planned to fry the cabbages and serve it over rice. No dice - she wanted soup. This wasn't soup, but it was soupish; more like a dinner porridge. So I decided to make a soup with cabbages and rice. It was vastly superior to what I'd intended to make, and I would like to make it
6 comments
Read more 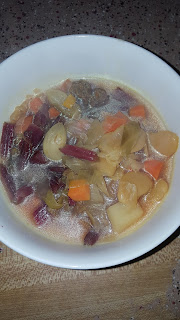 And once again, the trees are laden in pollen. I always forget the midwinter episodes of crippling allergies. Since I feel like I have the flu due to tree pollen, I figured I should make some gentle stew so I'm still getting some nutrition while eating is hard. This recipe should be adapted to whatever is in your house that needs to be used up. I went through my produce bin and found a lot of "half of this, half of that" in there. Those all feature here. Whenever I'm feeling under the weather, the stews tend to be comprised of whatever I was able to easily forage from the fridge, pantry, freezer, and/or garden with a minimum of effort. This should serve 4 people on its own, but if you put it over rice, pasta, or similar, you can stretch it to 6 or so people. Hope you enjoy! In a 2-quart saucepan, combine the following: 1 tablespoon each: sesame and veg oil 1 cup beet stems, chopped into 1" pieces (I pre-chop these when I buy the bunch of beets, since I
Post a Comment
Read more

January 23, 2019
The Pig asked me recently to make her some Olive Garden style meatballs and pasta, and I said okay. Today was that day. I looked up copycat recipes and thought, "nope." So I figured I'd just have a go at it. These were really, really easy to make, and everyone liked them. She asked if she could have leftovers for breakfast tomorrow, which is basically the highest compliment she gives. Outside the meat and an egg for the meatballs, all other ingredients can come from the pantry. I am not a huge fan of meatballs, so it's most likely I'll keep making this sauce without those. Hope you enjoy! Sauce: 1 14-ounce can each: stewed tomatoes, whole tomatoes 1/2c beef stock or water (I had leftover stock in the fridge, or I'd've used water) big, healthy shake of each: dried mint, dried basil, dried marjoram or other oregano, dried thyme, garlic and onion powders salt and pepper to taste add-on: meat, if desired, and/or olives, and/or mushrooms Put all of t
Post a Comment
Read more 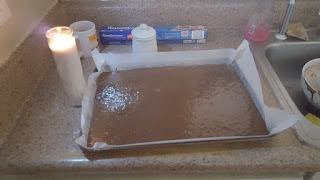 I wouldn't normally label something as complex as a Yule log as "kid food," but this was done by request, and with the kid. The Pig has been really, really into the Great British Baking Show , and consequently found out there's a food version of the Yule log. In celebration of Yule this year, she asked if we could make one together. Since I sometimes don't think things through, and other times think I can do anything, I said yes. Not only did I say yes, I promised we'd do it on Yule itself. Dumb, dumb, dumb. But also smart, because wow she learned a lot about herself, the world, interpersonal dynamics, history, modernity, tenacity, and the import of keeping one's word. She also found out that I was right that reading legitimately is the most powerful skill one can develop. I learned that I can, in fact, draw something decent if I have no choice, and also that it turns out I can pipe chocolate attractively. I generally reserve the doing of fine detail de
1 comment
Read more

Whenever we buy a watermelon and it has rind to speak of (a lot of the little personal sized ones don't), I carefully trim away the green skin, then the rind, and cut it up before storing for later use. Interestingly, the rind of the watermelon is the most nutritious part, despite the awesome of the flesh. Today, I managed to get the Pig to take a nap, as she'd had a pretty long few days and even longer month following the death of our beloved cat Aleister. But I was starving . She'd already requested butter-poached fish, sauteed broccoli, and rice for dinner, so I didn't want to go flesh for my lunch and did want to bump up my veggies for the day. After poking about through the fridge, I discovered half of a small onion and a quart of rind, so this formed the basis of the meal. Poking about the kitchen further, I found a sad tomato that the Pig and I bought from a farmer on our way back from our last trip to Austin, as well as a bottle of ají picante that I'd re
Post a Comment
Read more 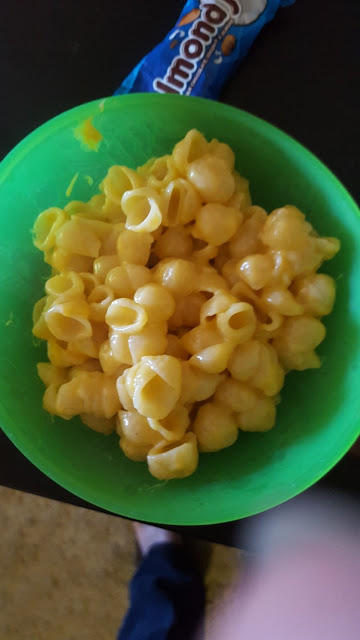 This is kind of a weird thing to say, but I usually can't stand mac'n'cheese. Occasionally I'll like a baked one, if it's lacking bechamel, but otherwise I'm a firm pass on this dish. My kid, however, really seems to like it. For a while, the Pig had gotten really into boxed MNC, and away from homemade of any type. One day, she really wanted MNC, and I was like, "I'm hungry too. If you let me make it homemade, I'll make it." She agreed, so I grabbed a bag of spätzle (b/c lazy) and made kasnocken for her. Since then, she's refused the box stuff. The other day, I didn't really feel like making that, when she asked for MNC, so I made this instead. The principle is basically the same, though. This takes about 20 minutes to make, which makes it perfect for a fast lunch. We split it, and she was happy because, she told me, it's fairly similar to the boxed without being quite the same. Hope you enjoy! 1 8-ounce package pasta (I use
2 comments
Read more 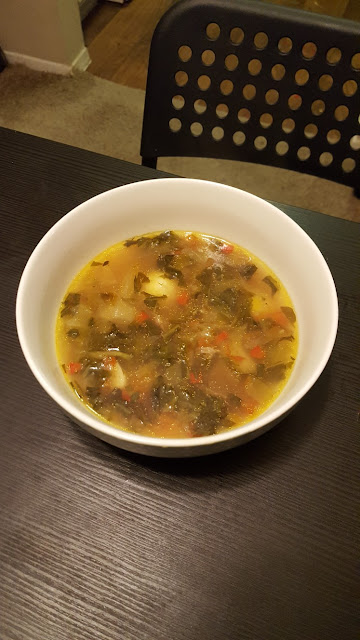 I started feeling sick on Monday, and foolishly attributed this to ragweed making a late season play against my general well-being. Tuesday, I realized how terribly wrong I was, but mostly just tried to suck this up with lots of fluids and broth, as well as various lozenges. By Tuesday night, I was sick enough that I realized I had gotten some kind of upper respiratory infection and couldn't breathe well enough to sleep without treating it properly. So I made some poultices and teas and drowned myself in them, then finally fell out. Wednesday, woke up quite a bit better, but the Pig was coughing. Turns out I'd passed the pestilence onto her. Since at 5, she's never been ill with normal stuff we're all used to, I figured I'd better nip it quickly and started drowning us both in tisanes, broth, elderberry syrup, and other such. Today, she was better, save a slight residual cough. I'm mostly better. It occurred to me at some point, though, that I lack the menta
1 comment
Read more
More posts