December 10, 2010
Okay, so if you're anti-hunting, or sensitive about animals, this might not be the post for you. Just sayin'. Today is a special day, since you get two posts today ;)

Over the summer, my friend Daniel walked into our class and said, "Hey Allie. How do you cook squirrel?" And there it started. A friend of his was moving and didn't want to move all the meat in her freezer. In this batch of meat is what he thought was 2 squirrels but which we now know was actually 4 of them. We had some discussion on the various techniques for cooking squirrel meat (I did actually have to research this, since it's not a game meat I'd eaten before), and then I forgot all about it. Until a week or so ago. For the final project in one of our classes, we were also having a potluck. Squirrel stew was brought up, and we went for it.

Daniel came over and we made the stew. It made significantly more than either of us expected, actually filling the 6-quart crock pot. The broth we made is one of the better ones I've ever seen come out of my kitchen. And by the way, did you know squirrel tastes like turkey? Really, really good turkey? I didn't. Here's how we made the stew. I'm sure this recipe won't actually help anyone who reads this blog, but I hope you enjoy reading it!

Combine all the ingredients in a large pot or dutch oven (I used the 7-quart Le Creuset dutch oven) and bring to a boil. Boil for about 2 hours, or until the squirrel is falling off the bone, replenishing water as needed. Remove squirrels to a cutting board. Remove large pieces of everything else, then strain the broth into a large crock pot.

Debone the squirrel and put all the meat into the crockpot with the broth. Add all the other ingredients and cover. Cook in the crockpot overnight. Makes 6 quarts. 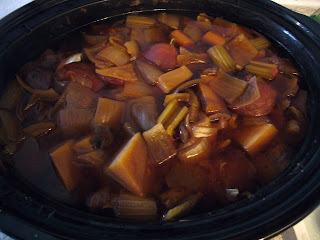