May 15, 2008
Ratatouille = Good. I wish I had bread, and I also wish I wasn't too lazy to either bake a nice,
crusty, rustic loaf, or at least to go buy one. But I am. So we had our ratatouille on rice. P doesn't know if he likes it or not, because he's sick. So to him it tastes... warm. But I can taste, and all I think is, Yum!

I added a couple ingredients that don't belong, and I took an abnormally large number of pictures. For step-by-step, even. So that's a plus. 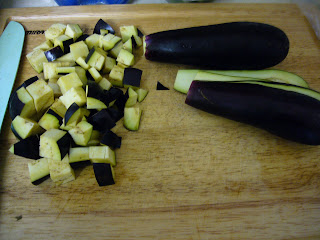 Heat a heavy-bottomed pan (I'm using my le cruset) over medium heat, then add 1-2 tablespoons of olive oil. When the oil is heated, throw in the eggplant and give it a pinch of salt (yeah, I said throw. I actually throw it in the pot, because it's fun). Fry the eggplant for about 7 minutes, then remove from the pot and set aside. 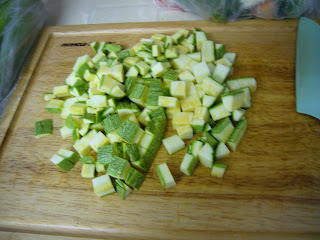 Now, cube those zucchinis (in fairness, I actually used a Mexican summer squash, but I would have used zucchini if the store had had some), add another 1-2 tablespoons of oil and ping the squash into the pan. Salt it a little, too, then fry that for about 10 minutes. When it's done, add it to the eggplant. They can hang out and get to know each other a little better while we're busy. 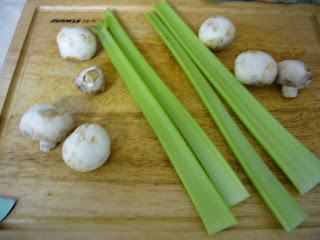 So in this next part, we've wandered off the beaten path. So if you really like ratatouille to be more traditional, skip to the next set of pictures.
Cut up your celery, and quarter the mushrooms. Put some more oil in the pan, throw those guys in to cook together and salt them a bit. Let them cook about 6 minutes, then they can go mingle with the eggplant and squash. 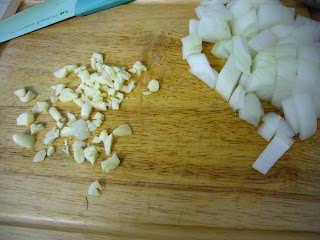 And now, we're back on track. Chop up that onion and the garlic. Once again, put a bit of oil in the pan, add the aliums and salt them. Let them cook for about 7-10 minutes, but this time, we're not going to take them out!! 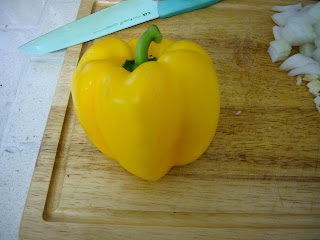 Now, you get to cube up the bell pepper. I used yellow today. You use what you want to, but do get a big one if possible. I mainly like to use yellow because it retains its colour better than green does. Cube it up, add it to the onions and garlic, then fry that too for about 5 minutes. 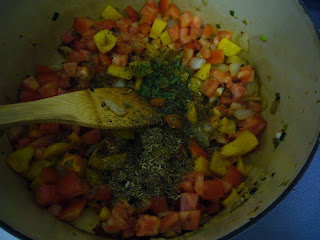 Now, dice and add your tomatoes. At this time, add in another teaspoon or so of salt, plus 2 tablespoons of herbes de provence and an extra teaspoon of tarragon. If you're using fresh tarragon, throw in a tablespoon or as much as you like. If you want to add a little more oil, go for it. If not, don't. You're going to let all this mess simmer for 5 or 10 minutes.

After it's simmered a bit, add back in all the other veggies and stir well. Cover it up and let it hang out for at least an hour. Then you can eat it. It's good with rice, it's good with bread, it's good alone, it's good hot or cold. 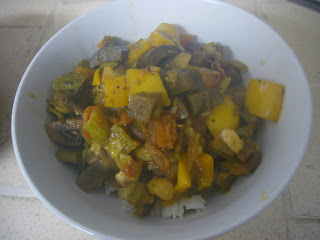 If you don't see any more pictures for a while, this is why. ;)