July 19, 2010
As you all knew, I have a bunch of pumpkin in the freezer from last winter. I think in the future I might cut the pumpkin into cubes and store it that way, so it's a little more versatile than mashed pumpkin (which of course I could later mash if so inclined). I think I wind up hanging onto mash a lot longer than I would cubes because I really only use it for dog treats, muffins and shells/ravioli. I'm still working through that massive bag of corn, but I bought some ricotta as well (mainly because I knew I have a lot of pumpkin), so it seemed like maybe a little corn might be nice for texture. Which of course led me to beans, so I could have a 3 sisters shell. Since there was some cream cheese I knew was going to get wasted (since I haven't been buying or making bagels), I thought I'd toss that in too. Worked really well. You could make this into a full box of shells batch if you don't stuff them as much as I do. And, of course, I got to use up another bottle of pasta sauce. So all in all, it worked out well for me since the only thing in this meal that I had to buy for it was the ricotta. Also, it had the side benefit of ensuring I'd be able to participate this week in Presto Pasta Nights, hosted this week by Janet at The Taste Space! Hope you enjoy!

Preheat oven to 350. Cook pasta according to package directions and let cool enough to handle. Mix together cream cheese and pumpkin, then add ricotta and spices and mix thoroughly. Stir in corn and beans, then stuff mixture into the shells and put in an oil sprayed 13x9 pan. Pour sauce over and bake 1 hour. Serves 4-7. 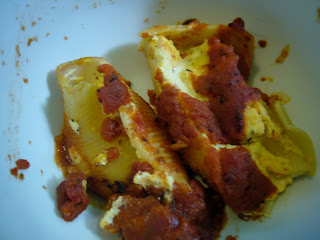