July 12, 2010
I had some brown rice left over from the chorizo meal, and while I was tempted to eat it with piles of salsa mixed in, I was even more interested in eating that salsa with the tortilla chips in the pantry. So uh... yeah. I couldn't really think about what I wanted to do with the brown rice otherwise, since I didn't want to fry it up into rice balls (uses too much oil, and that stuff is expensive!) and I didn't want to use it for a fried rice or stir fry since I'm mostly limited on veggies right now (okay, that's only partly true, but it's true enough since I have some other things I'd like to see happen with those veggies). Which left me kind of confounded. Of course, I could just chow it down with the lemon like I like to do, but then once again I'd have nothing to tell you. And I've already had nothing to tell you, in terms of recipes, for a while because I forgot I was only one person when I made that ginormous casserole (which, by the way, you *will* be bored of by the 4th day and you *will* want to do nothing but eat chips if you don't mix in some other food to eat. So don't be dumb like me) and that's all I ate until Sunday, basically. Except, y'know.. chips. And rosemary Triscuits with pickled banana peppers. You should eat those. They're really addictive. Just so you know.

And then I remembered the almond milk. Oh man, I have milk! So that means I could make some rice pudding to eat for breakfast and then also to share with a friend. My friend Daniel is really into homemade sweets but doesn't make any so I like to share with him. I also remembered that I had a lot of almonds in the freezer, some of which I could slice for this (to make it double almond), and some dates in the pantry which could be chopped up. Since the dates are so very sweet, I decided I should limit the sugar added since no one likes food that's overly sweet. Okay, maybe some people do. But I don't. And here it all happened. Hope you enjoy!

2 cups leftover rice (mine was brown but you can use anything)
1 1/2 cups unsweetened almond milk
2 tablespoons vanilla sugar
1/2 cup chopped dates
1/2 cup sliced almonds (or just roughly chopped, if you're like me)
1/2 teaspoon cinnamon

What I actually did: Pull saucepan of rice out of fridge. Add to it all the other ingredients and put it on the burner at pretty low heat. Stir it around, then add another splash of milk because there wasn't enough in there at the beginning. Heat while taking the dog out to potty, then come back and stir it. Then do a proof, and stir again. Sometime soon it'll be ready to eat, once it thickens up (which happens after another 2 proofs). Serves 2. 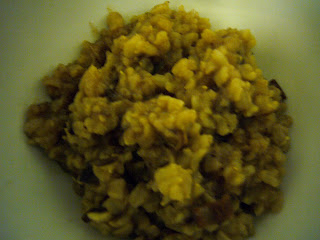