November 13, 2008
The downside of being sick is that you really can't taste anything, and you don't really want to eat anything. I'm still eating though, because I'm trying to get over this illness as quickly as possible so I can go back to school and work (I went to class Monday and to my morning class Tuesday, but have done nothing else since). Today I have been eating odd foods. One of the things I ate was a version of "chicken soup" that I think only a sick person would want to eat. I dumped some leftover rice in a bowl, poured on some lemon juice and crystal's hot sauce, then threw in a teaspoon of shmaltz, a bunch of leftover roasted veggies and some homemade chicken broth. Then I threw it in the microwave until it was hot. I don't know how it tasted but I think it was okay. It didn't make me sicker, so that's all I care about (P said it looked gross). I also have eaten a lot of dried fruit, and pickled onions. A lot of onions. Nearly a jar. Add that to simmered honey, lemon and honey tea and lots of broth, and I decided I wanted something strong enough that its flavour could bust through my currently ineffective taste buds. Enter hot chocolate. Despite my nostalgic love of packaged hot cocoa, it tends to be weak in flavour, even when made with milk so I decided to sit in a chair and whisk up some of the real stuff. It was awesome. I could taste it. I should hope I could taste it, considering what a diet buster it is! I hope you enjoy!

2 cups (500mL, approx) whole milk (you can use lighter milk if you like - this was super rich)
2-3 ounces grated dark chocolate (I used 2/3 of a bar of chocolate which was 86% cocoa)
1/2-3/4 cup vanilla sugar (or use just sugar, and throw in some vanilla extract at the end)
5 cardamom pods, ground (I sifted these as well, since I mortar and pestle it)
pinch nutmeg

Heat in a pan until it's at a strong simmer, whisking continuously. Top with an overabundance of marshmallows. Serves 2.

Variations: Melt in some crushed candy canes or peppermint extract. Or some orange extract. Or cherry even. Yum! 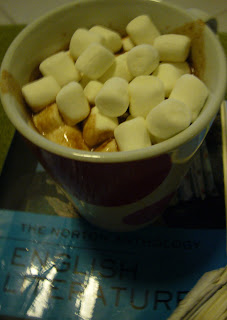