November 03, 2008
We got some delicious things at the farmer's market this weekend. I bought another 2 weeks worth of eggplant (sorry, to those of you who're tired of it) for 4 dollars, and this time I got zucchini instead of yellow squash. But, since we didn't show up uber-late this time, we actually were able to get some fresh eggs and some beef sausage. I really just wanted to eat the sausage and eggs, but I wanted a good excuse to put some eggplant in, as well as other veggies. Omelet it is, then. I made a huge amount of filling, so this are definitely over-stuffed.

This recipe is another one of those that seems like it's got a lot going on, but truly it's quite easy to cook.

1 cup arugula or baby mustard greens (I got both at the market, I just don't remember which one I used here)
salt to taste
1 tablespoon lemon juice

Ok, so here you can choose if you want to do the meat first or later. I did it later, because I got so excited about the fresh eggs and stuff I totally forgot I was excited about the sausage too. Anyway, I'll tell you how I did it, and if you want, put the meat first, then proceed. Oh, and in case you were curious, I've mostly been slicing my garlic recently because I love the flavour of garlic but want to cut out some of the potency. Slicing, instead of mincing, allows me to have the best of both worlds, so to speak.

Heat pan at medium, then add butter and oils and let heat. Toss onions, salt and pepper into the pan and stir to coat. Cook until they are slightly browned and about to become translucent. Add garlic, eggplant, salt, pepper and lemon juice. Cook until the eggplant is softened and mostly cooked. Throw in the mushrooms, season them and add more lemon. Cook this until the mushrooms are done, then pour it all into a bowl, cover with foil and set aside.

Then add to your pan the olive oil and sausage. I took the casing off my sausage, but I only broke it into large pieces, about 1/2" around instead of breaking it up completely. Fry this until it's nearly cooked, then add the greens, salt and (yep, I know; I'm a lemon freak) lemon juice. Cook until the greens are done, about a minute and a half, then remove this stuff and mix in with the other cooked foods.

In a large bowl, combine the eggs, nutmeg, salt, pepper, milk and vinegar. Whisk well. Melt butter in pan, then pour egg mixture into the pan. Watch the eggs carefully. When the edges are cooked enough that you can comfortably lift the sides of the omelet with a spatula (for me, this is usually around 1/4"), lift the sides and spill some of the uncooked egg underneath the cooked. A friend of mine pokes holes in the bottom of the omelet, and if you like that method better, go with that. I'm a lifter, personally. When the omelet is nearly set throughout, put little teaspoon sized dollops of chevre on one side of the omelet. Then pile on the meat mixture, and add in the tomato and scallions. Fold over the omelet as well as you can, then put a plate or lid over your pan and let it cook another minute or so. Serves 2. 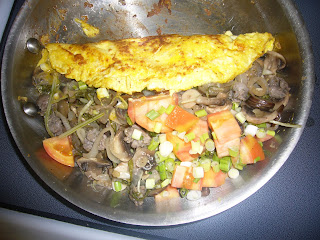