November 05, 2008
After the storm, my mother sent me a bunch of spelt. I thought this was great, since I'd been intending to get some. Of greatest interest to me regarding the spelt was cooking it as though it were risotto. I've noted over the last year a lot of people have been making risotto with grains other than rice, and the thought of the crisp, chewy grains of spelt were particularly appealing to me.

To top it off, I also baked a chicken earlier this week. So this was a great opportunity for me to use up some of the leftovers. For one, I saved all the shmaltz (chicken fat) from the chicken, as well as the collagen jelly. I got a lot of jelly out of this chicken (which, happily, was on sale for $2.50 for the entire chicken). So I've been using the jelly as a fat replacement in my cooking. I still add in a little fat here and there, but the jelly is working beautifully to add a bit of meat flavouring to non-meat dishes.

And, of course, I got more beets, so I'm using the stems again. I really enjoy the little bit of beet flavour that comes from them, without all the long-term cooking beets are normally associated with.

I actually just cooked the spelt until it was fairly chewy, rather than letting it break down more. As a result, I had some broth left over in the pan and I just poured it straight into the bowls so it could soak in as we ate. This dish is also very economical, and can be made to stretch significantly further by simply cooking in more spelt than the one cup I used. I hope you enjoy it!

1-2 tablespoons shmaltz (5 cents)
1 tablespoon olive oil (15 cents)
1 cup spelt (25 cents worth if it hadn't been free)
3-6 cups broth (I needed 4; your mileage may vary), heated to a simmer (free, since I made it using the skins, peels and ends of veggies I've already eaten)
salt and pepper to taste (2 cents)


Heat the collagen, then add in the beets and onions, plus salt and pepper. When nearly cooked, add garlic and celery. Cook through, then remove from pan to a bowl. Heat shmaltz and olive oil, then add spelt. Fry lightly, then start adding broth one ladle-ful at a time. As the spelt absorbs most of the liquid, add in another ladle of broth. Periodically taste a grain of spelt to test for doneness. When nearly done, add in the cooked vegetables as well as all other ingredients and stir well. Cook another 3-5 minutes, then serve. Serves 2-3. 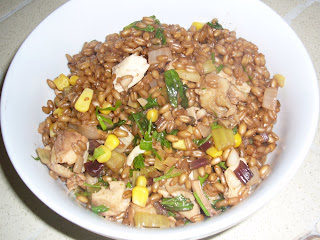