November 11, 2008
Originally, this was going to be just pear. And a crostata. Then it was going to be a pear and cranberry crostata. But then I had an incident with my lasagna noodles that meant I was going to have to make them from scratch since I can't go to the store today, and this very suddenly became a tart. I also actually did one layer too few, so I'm recommending you do 3 pear layers instead of the two I have, so your shell is full. :)

I hope you enjoy!

Preheat oven to 400F. Line tart pan with prepared crust. Dust it with the cornstarch. Arrange half the pears in a spiral (or however you want to). Dust with a scant 1/4 cup of the sugar. Top with cranberries, concentrating the cranberries around the edges (but not exempting the middle from them). Use any malformed or small slices of pear to fill in the gaps around the cranberries at the edges (so the top layer will stand up straight, so to speak). Arrange remainder of pears on top of the cranberries (if the pear slices are falling down, feel free to stuff some more cranberries under them to keep them raised up) in another spiral. Dust with another scant 1/4 cup of the vanilla sugar. Repeat as before, with the cranberries, another pear spiral and the remainder of the vanilla sugar. Bake for approximately 50 minutes, or until done. Heat jam and water until it's relatively thin. Let it cool thoroughly then glaze with jam mixture. Serves 8. 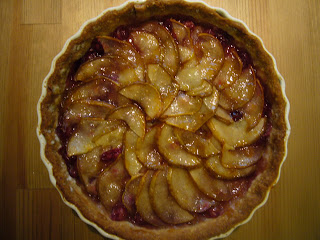