November 18, 2008
I have some beets, as per usual, and also some brussels sprouts. P was wanting some of the Anson Mills grits we got, but I didn't really think that was going to be enough for dinner (despite us now both being sick). That being said, I wanted to keep it light (because we're both now sick). So I decided to roast some veggies and make them part of a salad. This is kind of sweet-tart, seasonal, inexpensive and healthful. Hope you enjoy!

Heat oven to 350F. Toss the bread cubes in the oil, salt, pepper and sumac. Spread them out on a foil lined baking sheet (or not foiled lined; it just makes my clean-up easier). Roast for about 15 minutes. Yay croutons! Combine the second group of ingredients on in a roasting pan (or on the baking sheet) and throw (not really) in the oven. Raise the heat to 400F, and let the veggies stay in the oven for about 30 minutes, or until done. Turn off the oven, but leave them in there to finish off. Prepare your third group of ingredients (the seeds take me a while, personally. I view the deseeding of a pomegranate to be a nearly sacred event, so I take my time, enjoying the pop of each seed as it leaves the pith and plops into my bowl). Line plates with lettuce. Pile half the roasted veggies on each plate in the middle of the lettuce, then surround with all but the pomegranate seeds. Whisk together the last group of ingredients and pour over the salad, then top with seeds. Serves 2. 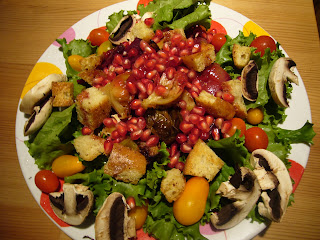