February 28, 2012
Alright guys, this is a two-for-one recipe day. I was laying in bed a couple nights ago, thinking about pumpkin. I guess I'm thinking about a different food each time I'm laying in bed waiting to fall asleep, but this time it was pumpkin. Mostly because I'd forgotten I had that big pumpkin left, until Ross came up to me the other day and mentioned that the pumpkin had mold in a little spot on the top near the stem. Naturally, I figured I had better get to work processing that pumpkin immediately, so I did it the next day. :) I only lost a bit of the top that I wouldn't have lost otherwise. The seeds are sitting in a bowl of water now waiting for me to have time to roast them. The rest of the pumpkin has been sliced, rind on, into 4"x1" pieces, after which I flash froze it, bagged it (4 bags) and laid those in the freezer to hard freeze. I already had 3 cups of pureed pumpkin left in the freezer, plus some pumpkin ravioli filling (which is now in the fridge), so I didn't want to make any more mash. Aside from that, it occurred to me that by declining to mash-then-freeze my pumpkin, I have greater flexibility in my cooking with it. If I need more puree, I can thaw, roast and puree. This way I can roast-and-eat pumpkin, grill it, cube and stir fry it, and all sorts of other things. I think I'll do it this way for the rest of my life now. No more being locked into mash!!

Anyway. After I got done, I had about 1/16 or so of a pumpkin left that wasn't being frozen, and I cut off the skin and diced it into 1/2" cubes, then threw it in the fridge to use later. Ah, fresh produce. Happiness. Love. Fulfillment. So laying in bed that night, I thought about pumpkin stir fry, and I thought about (and talked with Ross about) putting tiny pieces of squash and scallops in raviolis instead of a mashed-type filling. And then I thought about pancakes, and I decided that's where I needed to go with these little cubes. Instead of putting the pumpkin in the pancakes, I decided to put it on the pancakes. And so because of that, you get the pancake recipe my mother always made, which dates back to 1842 (I have no idea whose recipe this is originally or how it came to be in my family), and you have the pumpkin ... uh... chutney-like, I suppose, topping. Hope you enjoy!

The Pancakes (I actually make half recipes of this, and it's still about twice what Ross and I can eat. I don't measure the salt, baking powder or soda)

1/4 cup each: brown and white sugar
juice and grated rind of each: bergamot (or lemon) and wekiwa orange (or other mildly sweet orange)
1/2 teaspoon salt

Combine first 3 ingredients in a skillet and cook until squash starts becoming soft. Add remaining ingredients and cook down until thick, chunky and where the sauce is a sauce but not super runny. Pour over pancakes, ice cream, or whatever you like. 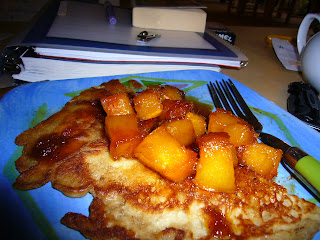