February 08, 2012
Alright, so y'all know where I'm at right now with the bergamots, yes? In heaven. That's where. So yesterday we did the bergamot sugar, which was important because we need it for these caramels and such. Today, we use that sugar in these caramels. The basis of this recipe is the ever-so-popular (and for good reason; it's an excellent recipe) 2004 Gourmet Fleur de Sel caramels (y'all will have to google for the original recipe, since I printed it ages ago and didn't save the link), with some differences. I made quite a lot of changes to the recipe, but I still like to give credit where it's due so I wanted to mention where the base came from.

I had some little adventures while making this caramel. The adventure was in that I am sometimes cursed with an utter lack of forethought. This was one of those times. It's been raining for days (okay, I'm writing this the Saturday before this goes up, so... I don't know if it's still be raining for days at this point), and high humidity (yes, I know I live in Houston) coupled with sugaring is bad news for whatever candy you're making. However, it turns out, that when the humidity is super high (i.e., it's flooding again in your 'hood), and you decided, like a moron, to leave your back door open overnight while the caramels were setting because you wanted to sleep to the sound of the rain (instead of shutting the door and using the A/C to reduce the humidity indoors), and your caramels come out more like caramel sauce in the morning, it's okay. Just cook it again. Twice even, if you need to. But let's not talk more about that. :)

And now, I want to talk about about syrups. Everyone hates HFCS. I get that. But honestly, a little isn't bad for you if it's a moderation sort of thing. I'm mentioning this, because I did not use corn syrup in these caramels, for reasons to follow. I used beet syrup. That being said, I also understand that beet syrup can be a little hard to get, and when I don't have beet syrup I happily use corn syrup in my candy making. And you should ignore this change in my recipe and use corn syrup if you're married to the idea of a perfectly traditional texture for your caramels. Beet syrup isn't going to give that to you.

When I was taking a chemistry class from the venerable Dr. Bott during my undergrad, we had to design a series of experiments to perform. My second experiment was caramels. What I wanted to know is if it was actually necessary to use corn syrup in candy making, given all the health concerns people have with it. It's not. In my experiment, I used corn syrup as my control, beet syrup for another batch, honey for another (this resulted, interestingly, in toffee), and no additive in another batch. Plus one regular batch for my candy wrapper assistants. Unlike what would normally happen with a chemistry experiment, we ate mine. The corn syrup ones were as you'd expect them to be. The beet syrup ones had a butteriness, softness and creaminess that none of the others had and that I'd estimate around 80% of tasters preferred. The honey ones, as stated above, actually became toffee instead of caramel, and the no additive ones, not surprisingly, were more like pralines (and were the least favourite of tasters). And that's why I now mostly use beet syrup when making caramels. I just wanted to tell you guys that, in case you were curious how this recipe came to involve beet syrup instead of corn.

Onward. The caramels came out really interesting, and quite good. They have, on first bite, a more normal caramel flavour. But as you keep chewing, the bergamot comes out, and it gives a sweet-sour kind of flavour where the muskiness of the bergamot comes out, but as more of an understated midtone. This is exactly what I was looking for, so I think the recipe is good to go, without modification. Unless you want to modify, in which case you should do so. Anyway, hope you enjoy!

Line bottom (and sides, according to the original recipe, though I never remember to do the sides) of an 8x8 cake pan with parchment paper, then brush or spray with oil lightly. Bring cream, butter and salt to a boil in a small saucepan, then remove from heat and set aside. Boil sugar, beet syrup and bergamot juice in a 3 to 4-quart saucepan, stirring until sugar is dissolved. Boil, without stirring but gently swirling pan, until mixture is a light golden caramel colour (honestly, this instruction makes no sense to me since it's so subjective, so I simply boil it until it's about 340F). Carefully stir in cream mixture, being careful to keep your hands out of the way of what is about to be heavily boiling sugar, and simmer, stirring frequently, until caramel reaches 248F. This takes about 15 minutes. Pour into baking pan and sprinkle with extra salt. Cool two hours to overnight. Cut into one-inch pieces (use an oiled pizza cutter for this) and then wrap each piece in wax paper (Ross does beautiful twists, I do lazy ones. You can totally tell which ones he wrapped when you look at them). Share and eat. 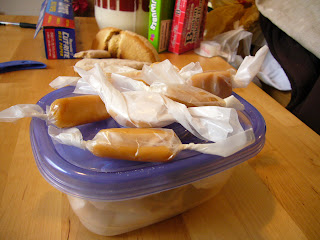