October 09, 2008
Today is pumpkin day. This means the next couple days will probably be pumpkin days for you all, in terms of reading my blog. Today I will just tell you all about what I did to process the pumpkin. Tomorrow I will make something with the pumpkin. And so on. I have a lot of pumpkin.

I think you all probably know how to make the pumpkin mash, but if you don't I'll tell you. Most people buy those little pie pumpkins. I like to just buy one huge pumpkin and be done with it. Some people say there's a significant difference in the quality of the mash but I think they're smoking a little something extra. Or maybe that's just because I just like to do the big pumpkin, and saying they smoke a little something extra is one way of justifying it. Either way, you get what you like. I spent $4 on my huge pumpkin. The little ones cost so much more.

So I cut my big pumpkin in half, from top to bottom. 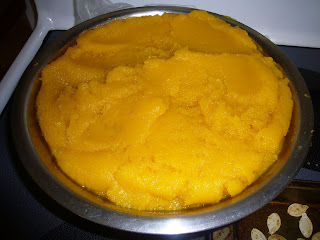 Then I scoop out all the seeds and the stringy bits. Most people throw away the stringy bits, but I have a use for them, so don't chuck 'em just yet. Put the bits and the seeds in a big bowl, and add enough water to cover (it's about three cups). While you're doing that, heat your oven to 375F. Cut each half of the pumpkin into 3 long strips, then cut each strip in half (this makes 12 pieces, total, for the whole pumpkin). I put half of the pumpkin bits on a sheet pan and toss it in the oven for an hour. I don't salt it, oil it, or do anything to it other than stick it in the oven and walk over to the bits bowl. When the first half comes out of the oven, take it out and let them cool until they're easy to handle. Put the other half in the oven for another hour. If you're not sure your chunks are roasted thoroughly, stick a fork in them. If the tines go in easily, it's done. If it's work, cook it longer.

While your stuff is roasting, you may as well start the pumpkin butter. I dip my fingers into the bowl of water-covered pumpkin bits, and I separate out all the seeds. Every last one of those little guys. They just get tossed in a colander. The bits get put in a measuring cup. My measuring cup says I got a full 4 cups of stringy bits from the pumpkin (I'm so glad I didn't get the biggest pumpkin, like I'd originally intended!). Throw it in a saucepan. Then measure out the water left in the bowl after the bits and seeds have been removed. If it's not a full 3 cups, then add enough water to make it so. If you don't have 4 cups of bits, btw, just wait until you make the mash, and then you can add enough pumpkin to make it 4 cups. Put all that stuff in your saucepan, then add: Let it cook for about an hour over medium to medium high heat. Then stick your immersion blender in there and blend away (or put it in a real blender and do the same). Keep on heating it until it's thick and ... uh... fruit-butter-like. I had to ask my mom about the correct texture, since I've never made this stuff before. She said not as thick as peanut butter, but not thin enough to run. Either way, do it like that. I reduced the heat as the mixture reduced, because I'd hate to have burned this concoction. Makes 1 1/2 cups.

You can can this is you like, but I just stuck it in a jar and it's in the fridge. I tasted it, and it's pretty yummy, so I don't think it'll last long enough to warrant canning.

Back to the Mash:

When the chunks of pumpkin come out of the oven, let them cool down until you can handle them. Then cut off the skins (unless you're cooler than me and already peeled them. I used to do that, until the year I lost a chunk of my thumb to the peeler. Now I do it after they're cooked), cube the pumpkin (don't feel bad if you can't help but munch on a few cubes of this sweet, sweet taste of heaven - it happens) and throw it in the food processor. You can use a food mill too, or a blender, or... well, you know. Do it however you like to do it. Then! Then, we make juice. Make your juice. Then portion out the pumpkin and store however you like (in the freezer, by canning, whatever. I'm not in charge of it). I like to store it in one cup and two cup parts, for versitility in recipe selection.

Take the seeds out of your colander (hopefully you've rinsed them well, but we'll get to that in a minute too). Line the colander with some cheese cloth and stick the whole shebang in a big bowl. Dump in the puree (I did half the pumpkin at a time), and let it drain. This is similar to what you do if you have one of those cool jelly strainers, but I don't have one so I had to make my own, so to speak. Anyway, let it drain. And drain. And drain. You can gather the tops of the cheese cloth and squeeze the pumpkin too, if you like. I do that when I'm impatient. I think it took around 2 hours total for the pumpkin to be "juiced." Put all that juice in a pitcher. I got around a litre. Chill it. It's delicious. If you like it sweeter though, add in some simple syrup or whatever you prefer.

Is this anyone else's favourite part? I love the pumpkin on the whole, but the seeds? They're like the reward for all your hard work. Most of the time I'm a purist about this, 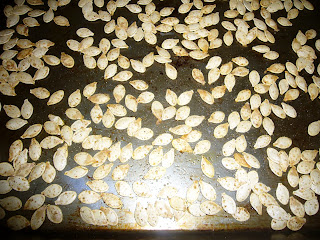 only adding salt and oil, but today I felt rebellious. So I used Tony Chachere's seasoned salt.

Anyway, rinse off the seeds in the colander, and get all the bits off. You need those for the butter. Then spread them out on the baking sheet and let them dry until you're done doing everything else with the pumpkin. Heat your oven to 250F or 300F (what I heat it to varies each time). Pour on a tablespoon of your chosen oil on the seeds, and whatever spices you like them to be seasoned with. Mix it all up, then spread them out evenly. Bake for 45 minutes to an hour, depending. Let cool, then eat!
bergamot Vegan