October 16, 2008
This is another recipe I'm using to illustrate the kind of really good food you can feed your family for a tiny amount of money. For this one, I was trying to optimise my usage of the ever-so-lovely beet. Also I am stalling on studying for my biology midterm, and this is a lot more fun. One nice thing about the quiche is that you can eat it cold, so it's perfect for P and I to munch on all day. One meal that makes many.

Also, I was craving quiche. For like, the last couple months. I just didn't feel like making it despite the craving until today. Which is, naturally, when I discovered I was out of milk, so I had to use evaporated. If you have real milk, use 1 1/2 cups.

I used to only buy bulk beets, but it occurred to me I should stop doing that. So this last time, I bought a bunch of beets with the greens still attached. The peels of the beetroot go in my bag of vegetable leavings for stock. The greens I wilted down with lemon and some other veggies and used them in a simple pasta (I make a lot of these pastas with whatever-veggies-are-in-the-fridge and tons of lemon meals. I've shown you guys a few of them). When I was trimming the greens from the beets, I put all the little stems in another bag to use elsewhere. Plus of course the roots, which I will either roast or pan fry on another day. A large bunch of beets cost somewhere around 2 dollars at the store, so I'm estimating each part of the beet bunch as costing $0.67. I used almost half the stems for this recipe.

Prepare or thaw one pie crust. Line a glass tart pan with the crust. Preheat oven to 450F. In a pan, heat the oil. Add in potato slices dusted with salt, pepper and nutmeg and cook until they are just beginning to become soft. Add beet stems, garlic and half the lemon juice, plus a touch more salt, and cook until firm but soft (raw, the texture of the stems is similar to rhubarb so you want to cook it down a bit). Add in bell pepper and scallions with the remainder of the lemon juice. Cook down. Turn up heat to thicken/cook away any extra liquid in the pan.

Total recipe cost: $5.67 (less if you make your own crust or use less/less expensive cheese. Why do my cheap recipes generally cost 5-something?)
Per serving cost: $0.71 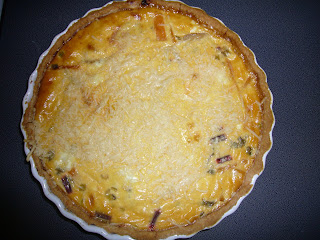