October 28, 2008
I wanted to make pumpkin empanadas for P on our anniversary (the 28th), but I wanted to minimise the amount of calories in each pie. I was basically successful (each pie works out to ~250 calories). Additionally, this is my entry for October's In The Bag.

This recipe has a lot of "parts" but is actually quite simple to make. I made one part here, and one part there, between classes, and just tossed them all together and baked them once we were both home from school.

Cut butter into small bits, and freeze. Freeze bowl of food processor (or your mixing bowl and whatever you intend to cut the butter into the flour with). Toss the flour in the freezer too, if you feel like it. I felt like it. Pulse the flour, salt and butter together (or cut/rub the butter in, in your usual fashion. I personally have given up on doing this by hand because I am getting lazier and lazier, the older I get) until it's in pea-sized bits. Add the anise tea, 1 teaspoon at a time, until the dough just comes together. It should take roughly 1/3 a cup, though it could be more or less. Put the dough in a flattened ball, wrap in plastic and refrigerate for at least one hour.

1/2 cup pumpkin puree
3 tablespoons loose packed brown sugar
1/8 teaspoon salt (I actually used about a quarter teaspoon of this huge flake Balinese salt and pounded it down with the allspice, but 1/8 teaspoon regular or kosher salt would be ducky)
1/2 teaspoon freshly (or not) ground allspice
seeds from 1 vanilla bean (optional)

Preheat oven to 350F. Roll out your dough fairly thin (1/8-1/4 inch thick) and cut out circles. I used a 3" springform pan to cut out circles. Place a large dollop of filling in the middle of each circle, then fold in half and crimp with a fork. Make a small slit or two on the top of each pie to let steam escape. If you feel like it, sprinkle a little bit of vanilla or turbanado sugar on top (I used vanilla). If you don't feel like it, don't do it. :) Place on a lightly greased baking sheet. Bake 25-30 minutes, until golden. Let cool on a rack before eating. Makes 6 pies. 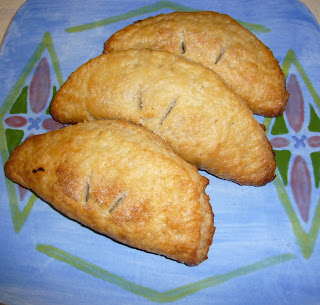 Baking In The Bag