March 17, 2008
This recipe should truly be used as a guide, not a be-all-end-all. My mother makes it with wheat berries (which is delicious also), and I don't recall my father ever putting grains into his soup. Every time it gets made, however, it's a little different. Today I wanted a more stew-like consistency than a real soup, next time, who knows? This is also really good with potatoes in it, and just about any variation will be delicious. Oh, if you have kids, or just really like onions, you can do this: both of my parents used to put a whole onion in the soup in addition to the cut up onions. I used to (mostly successfully) petition for the whole onion in my bowl. It is just wonderful. I wish I'd remembered that before I made the soup.

Also, most people make this with a whole chicken, or at least a mix of parts. I was being cheap when I bought the meat, and additionally I wanted to render the fat to make chicken pot pies on another date, so I just got thighs. You get what you want.

This recipe is kind of long and involved (compared to what I normally post). I just feel really strongly about my chicken soup and feel it's worth the extra steps and effort.

Anyway, enough rambling. Here it is:

Ingredients
1.5 pounds chicken thighs, skin on and bone in
2 bay leaves, divided
1 2-inch strip orange peel (or bergamot if you have it)
salt and pepper to taste
2-3 sprigs fresh mint
handful cilantro (if you're one of those who hates it, leave it out)
water
1 small carrot, sliced
1 small parsnip, sliced
2-3 stalks celery, cut into chunks
1 leek, trimmed and cut into chunks (and well cleaned)
.5-1 cup grape/cherry/whatever tomatoes, cut in half, or one regular tomato cut into chunks
1-2 tablespoons lemon juice
.5 cup brown rice

Directions
Debone and skin chicken thighs. Cube meat and set aside (refrigerate). Put fat and skins into a pan. Turn pan on the lowest possible setting and let it cook until you can render no more fat from the skins. Pour off fat into a jar or other container and refrigerate (this is good for lots of stuff and can be used just like you'd cook with lard). Blot (or not) the chicken skins and put them in a bowl. I serve these alongside the soup.

While the fat renders from the skins, place the bones in a pot, plus 2-3 cups of water (however much you think), orange/bergamot peel, mint, cilantro, salt, pepper and one bay leaf. Bring to a boil, then simmer for about an hour (it should reduce down to about 2 cups of liquid). Strain liquid into a larger pot and discard remainder. 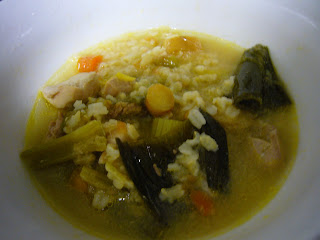