September 07, 2008
For those of you who know me well, I'll try not to wax poetic for too long about chili. I know you've heard it all before. But for those of you who don't? I love chili. I love it to a degree that's probably illegal outside of Texas. I love every regions variation (ok... I'll tell the truth. I'm not a fan of Cincinnati-style, though I do love my chili on pasta) of chili. My favourite, though? Surprisingly, for someone as exceptionally anal-retentive about proper chili cooking methods, it's not the traditional Texas chili. It's the Southwestern style. I love putting corn in my chili. And you really can't do that unless you make a Southwestern. Somehow, it's wrong.

This is for cooking on the weekend, unless you're unemployed. It takes all day.

This, however, has stepped away from the traditional Southwestern and has become some kind of bizarre creation that almost shouldn't be called chili anymore. It is, however, delicious. P and I are both sweating a little, which is a lovely, purifying feeling I never really get unless I eat chili. And for once, I actually did stick beans in this chili. A lot of them, in fact. Anyway, I can feel myself wanting to talk and talk and talk about chilis in general, so I'll stop and just tell you how to make this one. Well, sort of, anyway. A lot of chili making is feel, and instinct, and love. Mostly love. I'm excited to can the rest this week. There are some ingredients listed you might not need to use. Keep tasting throughout.

Oh, and a quick note about chiles: the smaller you cut them, the spicier they are. If you are very sensitive to chiles, you can use less varieties, less spicy varieties, leave them whole (wrapped in cheese cloth and later removed), or dice a potato into little bits and add it in. It'll absorb and reduce the heat.

2 large onions, diced
2 tablespoons vegetable oil
12 cloves garlic, minced
8 ounces sliced button mushrooms (this is another weird ingredient, so if you feel awkward about it, leave it out)
2 bell peppers
1 pound tomatillos, diced
5-6 garden tomatoes, diced
Chiles, 1-2 of as many varieties as you like

3 limes
salt and pepper to season where you see fit.

Soak the beans overnight. I was really shocked by how many beans this was, because I kind of forgot what a pound of swollen beans looks like, and the volume it occupies. But when they're nice and soaked (I changed the water 3-4 times), cook them. I simmered mine for about 75 minutes, then salted them and gave them another 15 minutes. I didn't drain them while the rest was happening, until I was ready to stick them in the chili. Cut up the meat, and sear it in a large pan. Toss it in a slow cooker, or in a huge pot, and add in the tomato sauce, beer, corn, olives and the juice of one lime. Turn it onto high (slow cooker high, not stove high) and put the lid on it.

Heat the oil in the same pan you seared the meat in. Throw in the onion and let them hang out for a while. They should cook over low heat and be almost carmelised when they're done. Add the garlic and mushrooms, and cook down. Then toss in the bell peppers and give it another 15 minutes. Then the tomatillos for 15 more minutes. Then the tomatoes, for 30-45 minutes. When you put the tomatoes in the pan with the other veggies, go ahead and add the beans and spices to the meat (but not the sugar, or the honey). Add the stewed tomato mixture to the meat. If it all looks really liquidy, toss in the tomato paste. You might not need this, though probably you will. I like it, usually. Let this hang out 30 minutes to an hour, to meld.

Now it's time to start looking at the chiles themselves. First, sort them according to heat. It's very important to think about the chiles, and treat them nicely. Chiles are not just in the chili to make it hot. To me, that's their secondary function. Each type of chile has a unique and special flavour (see? here I go, even though I said I wouldn't), and they should be treated with respect. Unless you're a heat monkey (in which case just skip this paragraph and do what you like, since I imagine you've got your own way on this), you'll want to build the chili properly here. It takes care, and above all, it takes TASTING. So, you want to arrange them according to their heat level. You'll put the mildest in first and work your way to the hottest (I end w/ a habenero, which sounds like it will make you cry, but my chili is actually not very spicy, relative to how it could be if I went for heat and not flavour). When you cut the chiles, take out not only the seeds, but the membranes. And for Heaven's sake, wear gloves if possible (and a mask if you're sensitive). Oh, and add in more line juice as you see fit. This is supposed to be personalised.

Put in the mildest chile. Stir it in, cover it, and let it cook for 30 minutes to an hour. Then the next hottest chile. And another 30 minutes to an hour. And so on. Do this process for each chile. It allows the chili to get the flavour of each pepper and not be overwhelmed by heat. After the last chile goes in, give it another hour at least (or up to overnight). Then you can eat. I like it with cheddar and onion. And sometimes on top of fritos. And other times on rice. Or by itself. Or with pasta. Or cornbread, and cobbler for dessert. Yum.

Oh yeah, I almost forgot. If it tastes bitter from all the cumin (mine did today), add in the teaspoon of sugar, and keep tasting. The honey sweetens it nicely and balances the bitter without ruining the flavour. So just use that first bit of sugar, then the honey. 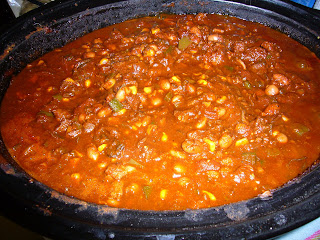 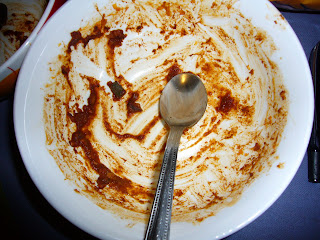