Roasted Pear and Sprouts over Rice

September 29, 2008
This is the first meal we're having now that we're back home. Our landlord brought us some pears from his brother's tree, and I really wanted to eat some. However, they're actually a little harder than even I like them, so I decided to chop a few into little bites and roast with some vegetables.

Preheat oven to 400F. Place citrus rinds in cheesecloth, then put broth, salt, rice and rinds in a pot. Bring to a boil, then reduce heat, cover and cook over low heat for ten minutes. Turn off the heat and let the rice sit at least 15 more minutes, covered and undisturbed. Combine all remaining ingredients in a casserole dish. Cover and roast for 45 minutes, stirring after each 15 minutes. Remove citrus rind bag from rice, and dish the rice. Top with vegetables and sauce (sauce being the drippings from roasting). Serves 2.

This, by the way, is a terrible picture. I have no idea where my camera is, so I used the one on the laptop. But it's a picture, none-the-less. 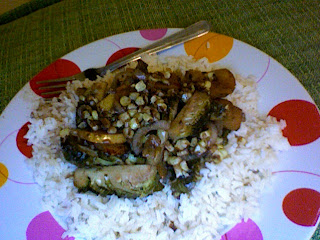