August 08, 2010
We ate these when I was growing up, and I just loved them. I believe my mother learned to make them from her Depression-era parents (though I could be mistaken), but given the economy I thought it might be nice to recirculate this tasty breakfast. I'm just listing it as serving one, but you of course can multiply it to serve as many people as you're feeding. One of the best parts of this recipe, other than it being inexpensive and tasty, is that the egg and toast are combined. If you're a runny yolk kind of person, it's set up perfectly for the dipping. Hope you enjoy!

Heat up a pan. Melt the butter in the pan, then tear out a hole from the middle of the bread (ball this up and eat your bread marble, or it's a nice treat to appease the dog who is going to be angry you didn't make him an egg too). Put the bread into the pan and break the egg into the hole (season at this point with salt and pepper). Fry until the yolk sets a bit, then flip (seasoning the other side) and fry until done as much as you like it. Serves 1. 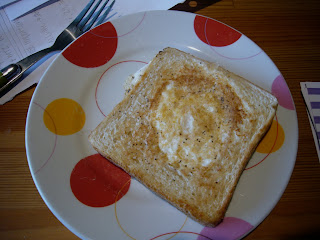