October 25, 2009
Today has been a big cooking day for me. Instead of doing homework, like I should be, I've spent the entirety of the day in the kitchen. I made pasta salad for us to snack on during the week, pumpkin bars that I'll likely take most of to school, and the lengthy process of starting meat sauce. I'd also intended to make quince paste, but I just didn't get around to that yet. I suppose I can read my philosophy and make quince paste tomorrow at the same time (since you have to sit there stirring for so very, very long).

In light of how much is going on in the kitchen, I wanted something simple for dinner, but still relatively healthful. I had a sweet potato lying about that really did need to be eaten, and I'd purchased a jar of pesto recently in the middle of a craving (okay, I was craving fried plantains dipped in pesto, but I forgot to get the plantains) that I was having. I know... most of you are probably purists in the sense that you don't buy your pesto pre-made, but since I know I am too lazy to make pesto the right way, I'm okay with buying one that's made with decent quality.

I thought the flavours would mesh well together while acting as a nice deviation from either sage (which goes so well with sweet potatoes and squash) or sweetened, dessert-like sweet potatoes. We both really enjoyed this dinner, and happily ate up seconds of it (accompanied by asparagus which I'd sauteed simply in olive oil with salt and pepper). I hope you enjoy!

Wash your sweet potato, and stick it in the oven. Turn the oven on to 400F. When the oven is heated, set timer for approximately 30 minutes and let the sweet potato keep baking. Poke the sweet potato with a fork to see if it's done, and if it is, remove it from the oven and slip the skin off (I love poking up a flap of skin with a knife then peeling it off the whole potato). Slice it in half lengthwise, then cut into roughly 1" cubes. Prepare the penne according to package directions, drain and return to the pot. Add the sweet potato cubes to the penne, then toss with pesto and keep on the burner long enough to heat through. Serves 2-4. 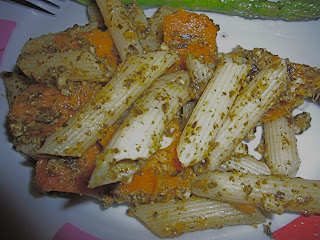