October 03, 2009
My goodness, the gaps between posts are just getting longer and longer, aren't they? I'm telling you, this semester is going to kill me. Thankfully, the lovely people at POM Wonderful offered to send me some of their juice, which I accepted. This rekindled my desire to be a little more creative with food and to focus slightly less on comforting stand-bys (which means a post, at long last!). They generously sent me a full gallon of the juice, which is good because P has been drinking it faster than you'd believe. He advised me to hide some of it if I intended to cook with it, so I hid some. Good thing, too since we're almost out of the juice that wasn't hidden! Anyway, if you haven't tried the juice, thus far it's been lovely to cook with (and for drinking as well). They didn't send me any of their teas, but I've tried them on my own and recommend them as well.

Onward. When I started thinking about pomegranate, and pomegranate juice, the first thing I thought of, of course, was red (maybe it's a rebellion against all the Descartes I've been reading?). Then I remembered I had a beet in the fridge I'd been saving for... well, I don't remember what it was for (though I'm glad root vegetables last a while without going bad). It seemed like it'd be really nice to cook the beet in the pomegranate juice, and then I thought I might have other produce that'd be good as well in it. I love how pomegranates are sweet but still a little tart. Turned out I had a little more produce I'd forgotten than I want to admit to (this seems to be a common theme with me these days), so I made the whole thing as one dish instead of just the beets and served it over rice. Oh, initially I'd intended also to boil down any remaining liquid after it all cooked to make kind of a glaze, but I ended up deciding the juices would be even better on the rice. Hope you enjoy!

1 beet, peeled and cut into cubes
1 red onion, cut into large chunks
5 large button mushrooms, quartered (these were supposed to be stuffed, but...)
1 cup yellow cherry tomatoes, halved
3 carrots, cut into 1" or so pieces
1 can black beans, drained and rinsed
8 ounces POM pomegranate juice
1/8 cup lemon juice
3/4 cup broth (I used a mix of beef and chicken, you use what you like)

Preheat oven to 300F. Mix all the ingredients together in a roasting pan and put in the oven for 30 minutes. Get really impatient that your food is taking too long, and stir the veggies, crank the oven up to 400F and cook it another hour, stirring half way through. Serve over rice (which I made using chicken broth and a bay leaf). Serves 2-4. 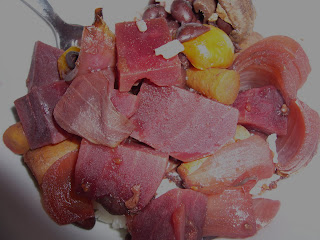