October 17, 2009
Well, sort of. My mom always made these when she was baking a chicken, so they're a little different today than how she normally made them. I always remember when she made these potatoes, that I was more interested in them than anything else that was on my plate. I could probably spend days eating bowl after bowl of her potatoes.

So, after the second day in a row that we went to the butcher seeking bones for Francis that they were out of dog bones (apparently the K9 unit snaked them all), we decided to have a treat and get some nice ribeyes. Yum. For a side, I'd originally planned to use up some of the frozen cauliflower and brussels sprouts, but P wanted potatoes. Just so happened I'd found a 5 pound bag on sale recently and hadn't used them all for potato salad (though I did make a lot of potato salad). I'd mentioned just making baked potatoes, but P thought they take too long to make so he suggested I cut them up and roast them.

Immediately, I remembered mom's potatoes. No chicken, but I figured I could make a rough approximation. I got really excited for potatoes then! If you want to make them more like mom's, ditch the celery salt and put a chicken on top of them to roast. Anyway, I hope you enjoy them.

Preheat oven to 450F. Cut the potatoes and put them in a baking dish. Drizzle on the oil, then sprinkle on all the spices. Bake 45 minutes or until crispy on the outside and soft on the inside (pierce with a fork to check). Serves 2. 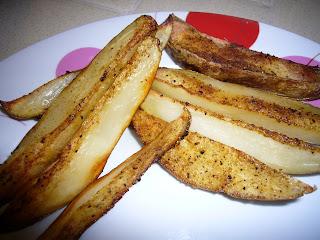