August 18, 2008
I was actually planning to post the bacon fried rice we had for breakfast the other day, but I suspect you all might need a break from the large amounts of meat I've been putting out there, as I do. So instead, you get tonight's dinner instead.

I've really been wanting to use the preserved lemons I made before P went to Brazil (this recipe is very similar to my preparation method), and had originally intended to just make a couscous with the lemons, using all the veggies as a side, but P wanted a larger type of pasta. So this is what we had instead. The lemons were really delicious, particularly with the beets and the roasted garlic. I hope you enjoy this (and soon, I'll give you the bacon fried rice too).

Heat oven to 400F. Combine first set of ingredients and roast for ~30 minutes, or until potatoes and beets are soft and garlic is creamy. Bring a pot of water to boil and cook pasta according to package directions. Drain pasta and put butter, oil and remaining ingredients in the pot. Stir until butter is melted, then add roasted vegetables and return pasta to pot. Mix well and serve. Serves 2.

This isn't the finest example of my food pictures, but it gives you the general idea: 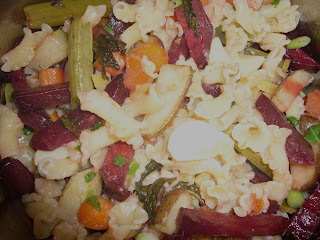