August 06, 2012
Y'all don't really hear from me a lot these days, I guess. Partly that's because I haven't felt like cooking lately. Partly it's because when I do feel like cooking, I mostly feel like cooking comfort food staples, which leaves me nothing to tell you about what I'm eating. Comfort food meals are pretty much the most awesome thing to me lately, since I've been spending the brunt of my summer doing advanced reading for my way-too-many classes in the upcoming semester.

Sometimes, though, I want something... else. Today is one of those days. I'm a little bummed I didn't have any bell peppers in the house, because that would have made this salad a lot more awesome than it is already. You guys can add some when you make it. This salad is pretty adaptable, and shows up all over the Mediterranean region in myriad forms that are alike and not alike. One of my favourite versions is the Italian one with tons of cucumbers. My version (today, at least), utilizes the produce I had on hand and a simple lemon-and-oil dressing. It goes well with the hummus I'm serving with it, as well as some spinach concoctions. In generally, I'm not entirely convinced there's anything it doesn't go with, since chick peas have that awesome status of being a bean but not ever seeming (to me) to be heavy like a bean. This is a vegan version, but you can change that by adding some hard boiled eggs, cheese, etc., should you feel inclined to do so. Hope you enjoy! 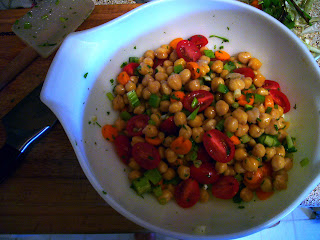