August 08, 2012
I can't remember if I had told you guys about this, but I while back (I think it's been two or three months), I had this cantaloupe that I just didn't get around to eating. Finally, I cut it open and it was really, really ripe. So we ate some, and then there was just a whole bunch of really ripe (bordering on too ripe) cantaloupe left. I kind of didn't know what to do with it, so I figured I'd just freeze it and figure it out later. And that's what I did: I cut it up into chunks and froze it in one pint bags.

I'd honestly kind of thought that I'd make some sort of cantaloupe jam or something. Mainly because frozen fruit is some of the easiest fruit in the world to turn into preserves, and despite making my own preserves I'm still rather lazy about getting it done. Maybe some day I'll actually make cantaloupe jam, but I sort of doubt it since I discovered that nearly overripe, frozen cantaloupe makes for some pretty awesome smoothies.

There're a lot of ways to do it, too. Sometimes I just blend up a bag of cantaloupe and some water. Sometimes I toss in some lemon or lime juice, or blend it up with a few blueberries. You could add yogurt if you had some, or none if you don't feel like it. It seems like the possibilities are endless. I wish I still had flax oil around the house, because I'd totally add that to it if I did. This time though, I did it a little differently than I normally do, because I woke up at 2 in the morning, after only 4 hours of sleep and was entirely unable to go back to sleep (I tried pointing my feet toward both directions in the bed AND on the couch, including getting one of the cats to come purr on me, and nothing worked) so I had a lot of time to think about what I wanted to make for breakfast. Hope you enjoy!

1 pint frozen and partially thawed cantaloupe (I basically thaw it in the sink for an hour or two, so it's partially frozen. Or rather, so it's frozen enough that I don't need ice, but not so frozen that my blender gets mad about it)
handful of fresh (or frozen) strawberries
1 1/2 cups orange juice (whee! this helps get rid of an oj I tried out and just do. not. like)
1/4 cup buttermilk (or almond milk if you want it to be vegan - I have both, but the buttermilk is coming due and I don't have room to freeze all of it and I am not entirely sure how many days in one week pancakes will be okay with Ross. Plus, the buttermilk gave it a bit of extra tang.)

Fill blender with the above, and blend until smooth. Serves 2 (2 pint glasses). 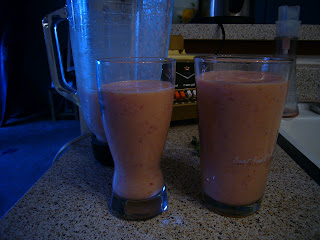