Wanchai Ferry Winners, and another Review

February 06, 2009
Thanks to everyone who participated in this giveaway! The winners, via random integer generator are:

Here are your random numbers:

So, that's Tim, seticat, dakotawitch and Joe! And then of course there's the repeated number, so we'll do another integer:

Here are your random numbers:


Congratulations! Please email me your names and addresses, and these'll be out to you ASAP! I hope you enjoy the meal packages!

And now, the Spicy Garlic Chicken review. Some of the things that applied in the last review still apply here, so I won't bore you with the repetition. I'll just go straight to the important stuff!

This was almost the same as the last one, except I had two extra steps. The first step was cutting the chicken (oh noes!), and the second was tossing it in the cornstarch mixture. Nothing too complicated, so I stand by my previous determination of its ease of cooking.

This was slightly sweeter than the Kung Pao. Not unpleasantly so, though it was on the edge of the sweetness levels I feel comfortable with. Kind of like a well-balanced beer that almost leans over to malt-y-ness. It was really good though, and had the same thickness as the one before. This one has a bit of spice and acidity to balance the sweetness, but it's not quite as spicy as the Kung Pao. It's also got the spice right in the flavour sauce packet instead of off in another packet. It was really good though, and P said to me, "This is really good!" several times while he was eating. He and I both agreed that one of the best parts of it were the unbelievable crunchiness of the bamboo and water chestnut. Now, I'll give that water chestnut typically stays crunchy no matter how you torture it, but bamboo doesn't always have that luck. It provided a nice contrast to the soft innards of crispy skinned chicken.

Again, the only thing I was really missing was more vegetation. I think it'd be impractical to package this stuff with vegetable cans in there (wrong texture for the veggies), but these could easily be added by the home cook with a minimum of effort. I don't know for sure that the absence of extra veggies would even by noticed by most, but we generally eat meat light and veggie heavy, so I'm missing them a bit. That being said, it'd require almost no effort for me to add these. So my recommendation is that you cube up a little carrot, zucchini and celery and toss it in with it.

Calories: This is supposed to feed 6 polite people, or 2-3 hungry people. Split in half, it worked out to 810 calories a person. Plenty to fuel you through your exercise regimen or busy day (for us, busy day, as we ate it for lunch and I had a lot going on, exercise-wise that evening).

So, in summation, I liked this one too. P seemed to enjoy this more than the Kung Pao, and I preferred the Kung Pao over the Spicy Garlic Chicken. For people who prefer more balance between spicy, sweet and acidic, I think you'll prefer this flavour over the KP. 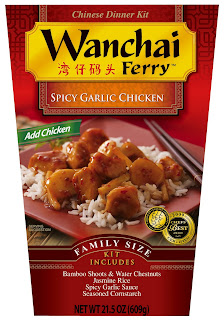