February 04, 2009
I'm still having troubles with my camera (meaning that in reality, I can't figure out where I put the memory card), so still no pictures. Sad, right? I have some good news, however! Today will be my first product giveaway.

The nice people at Wanchai Ferry have sent a product sample package to me, and have offered 5 product sample packages for winners. I received a package including one each: Sweet and Sour Chicken, Spicy Garlic Chicken, Kung Pao Chicken and Cashew Chicken. I believe these retail for $4.97 per package (so 20 dollar value, roughly). I'm going to randomly select 5 readers to receive a similar package. All you have to do is leave me a comment telling me how you make your favourite Asian dish (or just what it is, if you don't cook). The giveaway contest closes at 10 PM EST on Friday. Winners will be selected via random integer selector so it's fair for everyone. Good luck!

Now, on the to review portion. Today I did the Kung Pao Chicken box, though I'd originally intended to do the Spicy Garlic Chicken. Silly me, I forgot to take the chicken out of the freezer so that didn't pan out. However, the grocery store had shrimp on sale for $2.99/lb, and I really like kung pao shrimp, so that's what we went with.

I think you all know I'm a pretty frugal person, so it takes a lot for me to be willing to buy a box product of any sort. Because of this, I wanted to look at the cost first. If I assume that like most families, I don't have any of the stuff to make a dish like this (and therefore have to buy it all new, which is actually mostly true in this case, despite my normal food hording), the contents would be more than $5. I'd have to spend $4.95 just to buy the Kung Pao sauce. The rice would be another dollar or so for a new bag, and the peanuts would cost $2-3, and then 50 cents to a dollar for the chile pods. Plus meat. So walking out the door to creating this on my own, I'd be looking at roughly $9.50 before meat. This does actually make this an economical buy, unlike most packaged meals. Given that I used sale-priced shrimp (or I would've used another sale protein if shrimp hadn't been so cheap), the total cost on this package meal would run me approximately $8 for 5 servings as opposed to $12.50 for 5 servings. That makes the per serving cost $1.60 (as opposed to $2.50 done on one's own). Pretty frugal, really, when you break it down like that.

One caveat to this: while the package says it's a 5 serving meal (1 cup servings), it's really more like two unless you're using appetisers or sides. Even so, it's still $4 per meal which is frugal by most people's standards. I think this is kind of like how the Bertoli freezer meals say a certain number of servings, but most people just eat more in one sitting than a recommended serving might be.

Oh, and the website has a $1 coupon, as well as a satisfaction guarantee.

I'm not certain that this could have been simpler. For ease of preparation purposes, I mostly rely on what I think P would if presented with the task of cooking this. He avoids the kitchen at all costs unless it's just to grab a snack or make a sandwich (and even sometimes then). Packaged meals were his thing before we got together.

The package directions call for the two times you need water as two separate ingredients rather than saying "x water, divided." The ingredients that don't come with the box are listed under a bold header "You Will Need:" which is good for people who might normally think it's all-inclusive. Additionally, they provide extra directions for people who don't have the type of pan specified, or need to make other changes. For example, it calls for a non-stick pan, but I use stainless. The directions are amended to tell you how much oil to increase to if you're not using non-stick. There are pictures to go with each step of the directions.

Each step is carefully written out for maximum clarity, and the main words of each step are either written in bold font or in another colour and bold. Other tips and possible amendments (including high altitude) are included.

P said that if he was of the mindset to cook a meal that didn't come with meat already (which he generally isn't), he would cook this. He said the pictures next to the directions provide some relief and that more importantly, the kit inclusion picture (Kit includes...) was ideal because it shows him what everything is, in case he didn't know what something looked like (in this instance, kung pao sauce itself).

And it only took twenty minutes to make, which is win. Oh, and they have extra tips and ideas if you want to mix it up a little from the normal directions.

Okay, so I have to admit. I was a little worried. Most pre-packaged food items (especially those with sauces) are viscous, overly sweet and not very flavourful. This was a surprising change from what we normally might expect from a package.

The sauce was not especially viscous, but still provided a good coat to the shrimp and rice. The sauce had a bit of finishing sweetness, but not cloyingly so (I am very sensitive to the sweetness of packaged meals, and I found this pleasant instead of vomit-inducing like I normally do). It had enough salt that I didn't pour more on, but not so much that P complained about the saltiness (which he normally will do). It had a pleasant amount of spicy kick to it. If you are abnormally into spice, it gives directions (that I did not use, thankfully) to make it spicier. Despite the spiciness, the sauce still had a readily discernible and pleasing flavour.

It was a surprisingly good kung pao. There were a good amount of peanuts - enough that I wasn't thinking, "Man, I wish I'd added more peanuts." I got some in each bite. The only thing I was missing in the meal was the extra vegetables that normally come with kung pao when you're at a restaurant. I didn't miss them enough for it to be a disappointment, but rather something I realised long after I finished eating.

Per person, this worked out to about 800 calories each (we split it in half). That's a little higher than I might normally like to see, but significantly lower than it would've been if we'd eaten out.

All in all, I think I would be willing to keep these stocked on my shelf for days I don't really feel like cooking but don't want to spend the money going out to eat. Although the calories were a little higher than I prefer, it definitely had good flavour, was cost-efficient and was so easy to make I can't really express how easy it was. I recommend this product for those who want to give it a try.

My internet kung-fu apparently is crap, but I've finally managed to get the picture of the product from the site (woo!). So this is what the box looks like: 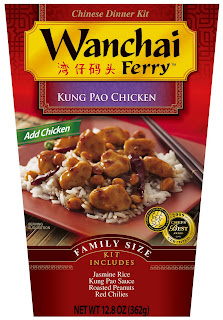