October 16, 2010
I was poking through the freezer looking to see what might be in there that I haven't eaten in a while that might be good. I know I have the white board on it, but sometimes it's good to just get your hands in there and touch stuff to decide what you want. I had forgotten that there were some Anson Mills grits, which are super expensive (hence I don't make that often. Not that, in fairness, I've cooked a whole lot recently) but incredibly delicious (that's the company that made me stop hating grits). Their expense is probably why I forgot they were tucked in there anyway, but it seemed like a good thing to eat for dinner. With bacon.

This is probably more of a breakfast thing than a dinner thing, but it's what I wanted for dinner. I like grits (when they're made well), but sometimes I like a little more textural variance in there. So I decided to add kernel corn. I've had grits made that way in restaurants before and I find it's a really nice touch that results in me eating more grits than I'd originally intended to. But I can't just be eating corn and corn for dinner because I have eaten so much less food on a daily basis lately that I try to pack in enough fat and protein into each meal to keep me going (more so than I used to when I ate constantly). So I decided to add in some Farmer's Market bacon that we didn't really like for just eating bacon strips but which I thought would be nice as lardons (they have a different kind of spice than we like for strips of bacon). And then I figured, while I'm at it, I might as well fry up an egg and have a full breakfast for dinner.

So this is simple, hearty food and doesn't take a lot of work to prepare. Which is what I'm all about right now. Anyway, hope you enjoy!

1/3 cup grits
1 cup water
salt and pepper to taste
tablespoon of butter (for this whole grits section, you should use whatever ratios are appropriate for the type of grits you have, but this is the ratio for the kind I have).

tablespoon butter (or the fat from the bacon, which is what I used)
2 eggs

Put the bacon in a pan set over low-ish heat and render the bacon until the bits are crispy. Set aside. Cook grits to package directions, but put the kernel corn in while the grits are cooking (I put the corn in when I first started cooking the grits so the water in the corn wouldn't mess up the texture like it might've if I added it later in the cooking process). Fry eggs. Spread grits into a bowl or plate, top with one egg and half the bacon bits. Serves 2 (this might only serve 1 person normally, but it makes 2 meals for me now. If you have a big appetite, scale it up to feed more than just you). Oh, I also like to eat this with pickled okra to add a little acid to the mix, and of course an egg gets made for the dog. Can't eat eggs and not give him one too. 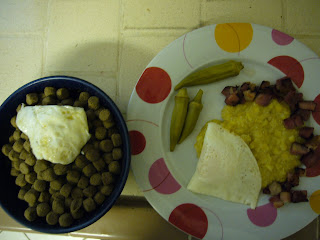