March 24, 2010
P and I made a startling and sad discovery recently. We Americans are not the only ones who don't make very good yogurt. We were out doing the grocery shopping, and on the list was the weekly supply of yogurt. Typically we buy Fage, mostly the one with the honey. P doesn't see the point in buying a large tub of yogurt and adding his own honey, because as he likes to tell it, "they use the honey that goes with their yogurt, in the right ratio, and it's already done for you." I think any honey really would be just fine, but that's just me. I digress. This time, they didn't have the honey flavour (that was mostly disappointing for me), but they did have the cherry (which was not disappointing to P, but which I didn't care about) so we got some of that. Also, there was a slot for some Icelandic yogurts. I got the grapefruit flavour and P got the vanilla. He's the main yogurt eater in our house. I usually get half the number of yogurts for myself that he gets, and I mainly get around to eating them when he threatens to throw them away if I don't eat them IMMEDIATELY (for some reason, he is really obsessed with expiration dates). Generally there is some negotiation about "tomorrow, I promise," and the yogurt lives another day (and then I eat it because I get a mean look from him).

As you might expect, he got around to his yogurt first. That day, I believe. And he didn't like it. I was kind of surprised by this, so I tasted it. I liked that the yogurt had flecks of vanilla bean in it, and it was a less synthetic vanilla taste than most vanilla yogurts. However, it was bitter. BITTER. Really, really bitter. As in, I would've kept eating it if my nose didn't wrinkle up every time I tried to take a bite. P wanted to toss it (and the grapefruit one I hadn't even opened yet), but you know how I feel about needlessly wasting food. So instead he put some plastic wrap over the top and tucked it back in the fridge. Three days later, I was told that if I didn't make something with the yogurt like I said I would, it was going in the trash (conveniently, it just so worked out that this threat corresponded not only with a birthday I wanted to bring something to, but with my desire to bring a sweet to a friend who bailed me out of some homework problems this week).

The sad part of this story is within 20 minutes of us deciding the yogurt wasn't to taste, I'd already found a recipe for a grapefruit yogurt cake that sounded good. The tab in my browser sat there, languishing, waiting for me to stop being so lazy. Admittedly, I have had a headache for the last three days, but that's not why I didn't make the cake - I didn't make it because I'm lazy. I guess if browsers could threaten to increase my food waste, I wouldn't be so lazy. So I made the cake. It's a recipe from Smitten Kitchen (again), and it's a recipe that works quite well, even in the face of not-so-great yogurt. The cake is just slightly sweet, which works well for me because aside from bakery frosting, I'm not hugely into super-sweet-sweets. It's incredibly moist and has a subtle flavour, though the grapefruit is still discernible. All in all, a cake I'll make again.

So I just have a few comments about the recipe:

- I used 1/3 cup vanilla yogurt and 2/3 cup grapefruit yogurt. You should use whatever you want, though. If you have some yogurt you don't like, this is definitely the way to go.
- This recipe, when you add the oil, seems like maybe it has too much oil. But it doesn't. Just be patient and keep folding and then eventually it'll all get in there. You might not believe me when you're in the thick of folding, but I swear I'm not lying. I managed to get it all incorporated, about 30 seconds before I was going to pour some off.
- I sometimes have trouble with parchment paper. So if the picture of my cake looks funny, that's why. You'll do better, I'm sure.
- Also as usual, my little comments will be in italics

Anyway, that's it. Hope you enjoy!

Sift together the flour, baking powder, and salt into 1 bowl. In another bowl, whisk together the yogurt, 1 cup sugar, the eggs, grapefruit zest, and vanilla. Slowly whisk the dry ingredients into the wet ingredients. With a rubber spatula, fold the vegetable oil into the batter, making sure it’s all incorporated. Pour the batter into the prepared pan and bake for about 50 minutes, or until a cake tester placed in the center of the loaf comes out clean. (this took a full 70 minutes in my not-so-great oven)

Meanwhile, cook the 1/3 cup grapefruit juice and remaining 1 tablespoon sugar in a small pan until the sugar dissolves and the mixture is clear. Set aside. (I might've used more than 1 tablespoon of sugar; I just dumped what was left in the jar into the saucepan)

When the cake is done, allow it to cool in the pan for 10 minutes. Carefully place on a baking rack over a sheet pan. While the cake is still warm, pour the grapefruit-sugar mixture over the cake and allow it to soak in. Cool.

For the glaze, combine the confectioners’ sugar and grapefruit juice and pour over the cake." 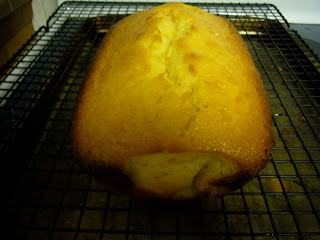