November 26, 2009
I hope you all are having a great Thanksgiving! Over here, we're having a great time. This year I declined to cook (!!!) and we ordered a lovely tenderloin package from Whole Foods. The food was great, and since it's just the two of us this year we have plenty to snack on through the weekend.

However, not doing the spread doesn't mean I ignored the kitchen completely. Instead of making dinner, I've spent the day baking various types of cookies to send to my mother for her holiday gift (we're doing only handmade gifts this year).

Which brings me to the mesquite. The people at Casa de Fruta (which is one of my favourite places in the world, primarily because of how wonderful their olives, dried apples and sheet apricots are! Plus they make some really delightful wines; I stop there anytime I'm in northern California) sent me a bag of their mesquite flour. It tastes kind of carob-like, and is flour made from the beans of the mesquite tree. Doesn't really get more American than that (like pumpkins, potatoes and corn!), which for me means Thanksgiving is the perfect day to start baking with it.

I added mesquite flour to molasses cookies, and I noted a difference in the depth of the flavour of the cookie. I also added some to the double chocolate biscotti, though in this recipe I think there was so much chocolate I couldn't really tell a difference. Additionally, when I made Francis some mini pumpkin muffins, I added some to that too. I tasted his muffins and the mesquite flour did represent the carob I deleted from the recipe.

I think if you're curious about amending your recipes to try a new product, or if you have people who require gluten-free food (which mesquite is), it's a good one to try out, and relatively inexpensive (given that you use just a bit at a time).

Many of my molasses cookies are malformed, but here's a pic: 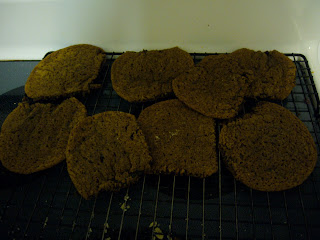