January 07, 2009
I love those little bottles of Italian Gardeniera mix. Love them. I don't know if I love their flavour more, or the fact that one jar is a whopping 40 calories. Either way, they're delicious, but oh-so-expensive!

While we were at the farmer's market, P and I saw some lovely purple cauliflower, sitting right next to huge bunches of dill and beautiful bouquets of broccoli. We thought they'd be nice to pickle together. The broccoli didn't quite make it into the jar, because I put so much other stuff in, but I will probably do the broccoli in other jars later. I hope you enjoy!

3 litres of mixed vegetables (I used the purple cauliflower, 3 carrots, a cup or two of celery sliced into 2" lengths, 2 green bell peppers in chunks, and half a bulb of fennel/anise, sliced thin, plus 10 cloves of garlic)
1 cup large sprigs of dill
4 1/2 cups vinegar (I used an equal mix of cider, white distilled and white wine, but you use what you like)
3 1/4 cups water
2 tablespoons sugar
1 tablespoon salt*
1 tablespoon bay leaves (I used all the crushed ones at the bottom of the bag)
1 teaspoon each: fennel seed, coriander seed
2 teaspoons black peppercorns
2 dried chile arbol (1 per jar) (optional)

Okay, so I used 2 1 1/2-litre jars (like these, which I bought for this specific application), but you do whatever kind of jars you have or prefer. Pack in an equal amount of dill in each jar, then equal amounts of veggies and chiles. Bring the vinegar, water, salt, sugar and spices to a boil, then simmer for 2-3 minutes. Pour the mixture into the jars, seal jars (not w/ a water bath, though if you are using traditional jars you are more than welcome to can them normally) and let come to room temperature, then refrigerate. Leave them in the fridge without eating for a couple hours up to a few days. Eat!

*Originally, I had about 3 cups less liquid I was using, so I probably should've increased the salt when I boiled more vinegar/water, but I forgot. If you're worried about it, double the salt. I'm not really sweatin' it, because I know they're going to be living in the fridge, and I also know they're not going to be around long, because I am HONGREE!! (and silly) 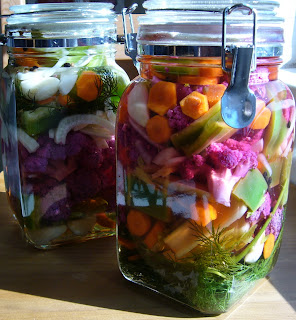