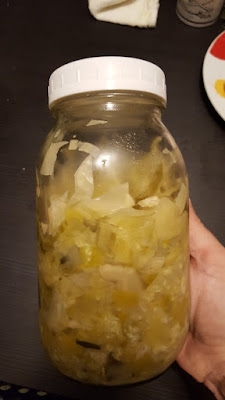 The Piggy and I developed this recipe specifically to go into ukha, a Russian fish soup. It's also really good in other things, but we mostly use it for soup, unless I'm frying something that needs both cabbage and leeks.

This recipe is very easy to make, requiring only 3 ingredients, but it does need a bit of special equipment. If you don't have a muddler, use either a wine bottle, flat-ended rolling pin, or potato masher. In most of my fermented foods, I use swing-top fermenting jars (I use a mix of Fido, le Parfair, and Kilner, but I've got some odd IKEA jars and other such as well). I mostly use these because they obviate the need for multiple items per Mason jar you'll ferment in, such as weights, fermenting pipes, airlocks, and so forth, but it's also much simpler when you know there's no need to check your ferments to see if they're doing okay. If the seal is good, they're doing okay. Plus, I get to use my Mason jars for other things, like jam and dry storage.

When fermenting, you want to always use non-iodized salt. Many fermenters use various sea salts they've determined to be superior, but I personally use whatever non-iodized is nearest to my hand. This is normally either Himalayan pink salt or standard, $0.43/tub free-flowing (non-iodized) salt. Of the dozen or so salts I've fermented with, I've noticed exactly no difference, so my advice is to use whatever you've already got (so long as it's iodine-free - that messes up the fermentation process, so keep that for your normal salting needs).

Anyway, although we call this "ukha kraut," it's flavorful and can be used in a lot of different ways, including eating it raw. Hope you enjoy!

1 large green cabbage, shredded or cut up (mainly it's just cut up in my house)
2 leeks, trimmed of the harder green parts but with the softer green kept, then sliced into half-moons
3 tablespoons salt

In a big bowl, put a big layer of cabbage, then one of leeks, and add some salt on top. Mash this up until you start seeing liquid coming out. Your goal is to really well break down the cell walls in the veggies so they produce their own brine without added water. Continue to add layers and muddle/mash until you've used up everything and it's swimming in its own brine. If it's not quite swimming, don't sweat it. All will be well. Pack it all down (pack it tightly, using your muddler, which will allow you to continue to sort of knead the veggies and increase the brine) and keep adding until there's basically no air left and jar(s) is full. Close and write the date on the top. This is fine to use at 2 weeks, but is better allowed to mature to one month, and best at 2 months. 2 months is generally where krauts hit their "sweet spot" for me. Once opened (you can leave this on the counter unopened for a fairly long time, though I don't think I've had one go over 4 or 5 months without us getting into it), store in fridge. If you need that jar again, simply transfer to another container and store in fridge, then proceed with your jar. This usually will make about 1-1.5 litres of kraut.