August 15, 2018
I realized the other day that it's been a very long time since my last post. My life has changed in a lot of ways, one of which is that I've returned to foraging. Since my interests currently lie primarily in foraged foods and ales, my focus will be on that for the foreseeable future.

One favorite foraged food for us is black nightshade. Although commonly perceived as poisonous, this is a food plant if you're treating it properly. The leaves can be cooked and eaten (young ones raw as well), but the primary value to my 5 year old, Piggy, is the berries. Filled with seeds and sugary sweet, they're a lovely treat. I recently dug up some S. americanum plants and transplanted to our container garden, but most of the berries I cooked today came from a plant nearly as tall as me that I noticed while foraging for dock seeds. That bush was huge. And also weighed down with ripe fruits, so I took a lot of fruit. I left about 1/4 of the fruit for the birds, focusing only on fruit heads that were completely ripened. No reason to take berries I can't eat, and the mixed ripeness heads ensured more to munch on for the birds. 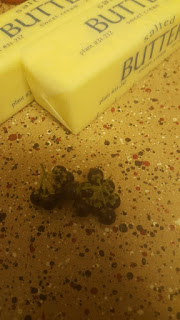 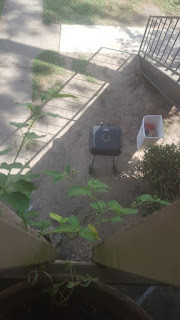 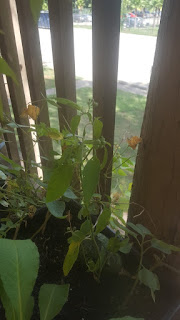 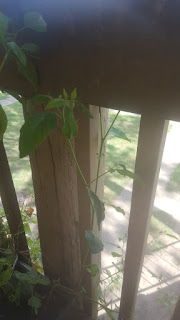 Once I got these home, I found myself unable to find time to do anything with them while I finished teaching two summer classes, so I put them in a container and tucked them in the fridge. A week or so later, I came to get them. After the de-stemming process (Pig helped, because she was insanely excited to discover I was making tarts for her), I let them macerate a bit before going into the shells. 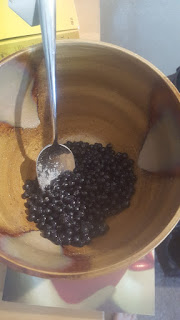 Because I only had a bit over a cup (didn't measure) of berries once they were de-stemmed (and I'd taken a few for seeds), I opted to do two small tarts rather than a single pie. I topped my tarts with a sprinkle of almond flour to add some texture, and also because I couldn't remember where I last put my cornstarch. These, of course, don't translate into the same effect in the pie, but almond flour works fine even if you prefer the texture of cornstarch. 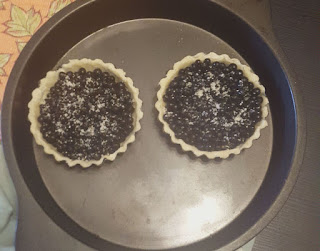 What follows is not a recipe, but rather a method. In most instances, I didn't take precise measurements, which means most measurements you'll see below are visual estimates (I am really good at this, but no one can be exact 100% of the time). You could use this method for other fruits as well, and you'd simply want to scale the estimates around the amount of fruit you have and crust you're willing to make.

I am really not a pie person, but it was a challenge for me to share the tart that was for R and I. These came out perfectly, and will be made as often as possible. There was leftover crust, which I've frozen for another day. 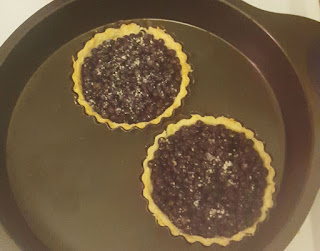 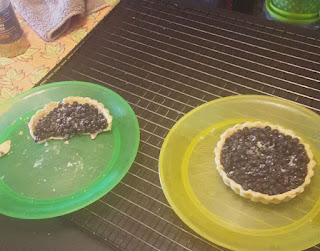 1/4 stick (4 ounces) cold butter
pinch of salt (maybe 1/4 teaspoon)
1 tablespoon vanilla sugar (or other sugar you have and want to use)
1 cup flour (I used all-purpose)
2-3 tablespoons cold milk kefir (you could use milk, yogurt, sour cream, cream, half-and-half, buttermilk, water, vodka, bourbon, or whatever you please)

Cut butter into bits. Mix together flour, sugar, and salt. Dump the butter into the flour mixture and mash it up with your hands until you see what looks like sand and gravel. Add in the kefir/whatever, 1 tablespoon at a time, until handfuls of the mixture stick together when squeezed lightly. Put in saran wrap, a container, or similar, and refrigerate for 30 minutes.

As your dough refrigerates, mix together the filling. Leave out almond flour, if using, but go ahead and put corn starch in if you're using that, and let the bowl sit on the counter. If you want to mash it a bit, feel free. It's not necessary, though.

Remove crust from oven and break off a piece. Roll to the size of your tart pan (mine are 3", I think) and put in pan. Cut or press off the excess above the rim of the pan. Do this for as many tarts as you're making (in this case, it will be two 3" tarts; it will be more or fewer, depending on how many berries you're starting off with), then evenly divide the filling into the tarts. Place tarts on tray of some kind and put in the fridge while the oven heats. Turn the oven onto 400F, and when the oven is hot, bake the tarts for 20-22 minutes.
Baking Foraged Foods Stories Vegetarian