December 20, 2012
I was gifted a couple winter squashes a few weeks ago. However, since it was the end of the semester and I was insanely busy with seminar papers, I hadn't had a chance to do anything with them. The one of greatest interest to me was the warty pumpkin, because it's really neat looking. I wanted to stuff it because I'm into stuffed squashes, as y'all probably know already. I think I've done two or three stuffed squashes before on here, but since I never make the fillings the same way, I figure one more can't hurt. You could, of course, do this on any squash roughly the size of a sugar pie pumpkin. But this is the one I used. Hope you enjoy!

Remove the core of your pumpkin, as well as any seeds and bits. Set the seeds and bits aside for later use. Then you can do this one of two ways: you can cut the pumpkin in half (as I did), or you can leave it whole. Whichever you choose, put it on a sheet pan with some water and roast it at 400F for 30-45 minutes, then let cool.

Combine salt, rice and water. Let soak while you're prepping and roasting your pumpkin, then bring to a boil. Once boiling, boil 1-2 minutes and then reduce heat to low, cover and cook for 15-20 minutes. Let sit, undisturbed and off heat for 15 minutes.

Mix together your rice with all the other ingredients that aren't the pumpkin. Stuff the mix into the pumpkin (either whole, or halved. I wouldn't cut it into more than halves or you'll struggle at best to keep the filling in). Put the stuffed pumpkin in a baking dish that is just larger than the pumpkin, and roast for 15-30 minutes. If you're doing this whole, you can even put the "lid" of the pumpkin back on (the stem bit you cut out to open it) before you roast it, and it'll be a cute container. I did mine in halves, because I knew it was just Ross and I eating so I wanted to keep it simple and just have half a pumpkin for dinner, two days in a row. If I'd been transporting it, I think I'd have left it whole since it makes a better presentation. Serves 4 (about 1/4 pumpkin per person; if you're feeding a lot of people, just scale up the filling quantities and stuff a larger squash, such as a large pumpkin or a hubbard squash). 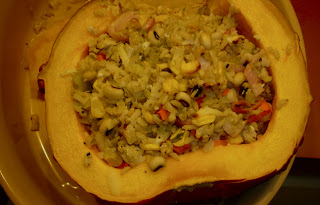