December 01, 2008
P is a little persnickety about his pear preserves. Most people spice them and he doesn't like that so I decided to make my own (okay... more truthfully I decided to make my own because the one he likes is expensive and he's almost out again). I did not use pectin (I don't know why I didn't, since I actually bought some), though you certainly may adjust the recipe for it. Pears are on sale here in Houston for 4/1.19, which is quite a lot cheaper than the $6.25/10.5 ounce jar we spend on the type he normally prefers.

Combine the pears and sugar, then refrigerate overnight (ideally. Otherwise, if you're forgetful like me, refrigerate for 24 hours). Stir and add lemon, then slowly cook until it reaches 220F (some people say to do this at a simmer for a couple hours; I just cooked it over low heat until it reached 220 on my candy thermometer and the pears were relatively transluscent). This took for-freaking-ever, because I was studying for a test and as a result, I had the heat much lower than I normally might have. I wound up with significantly more syrup than I expected (likely a bi-product of having let it sit for 24 hours instead of 8-ish), so I spooned the pear and lemon bits into the jars and then poured some syrup over them. This left a lot of remaining syrup (4 jars worth). I packed them into jars too, but when I should have done, and what I know you will do, is reheat it until it's a full 220F again. Then pack into jars. I left 1/2" headspace and processed in a water bath for 10 minutes.

The preserves set beautifully. 3 half-pints worth. The jelly doesn't look like it's going to set, although it appears to be similar to one of those runnier jellies instead of one of the loose syrups. Either way, I'm keeping it on hand for pancakes instead of trying to set it again. I got 4 half-pints of that. 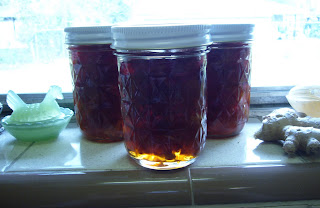